After throwing former Donald Trump under the bus following this month’s impeachment acquittal, Senate Minority Leader Mitch McConnell says he would back the former president if he wins the party’s 2024 presidential nomination. 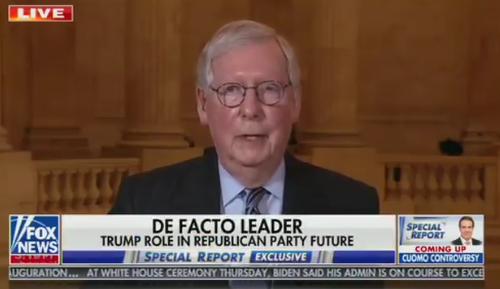 “There’s a lot to happen between now and ’24. I’ve got at least four members that I think are planning on running for president. … Should be a wide open race,” McConnell told Fox News’ Bret Baier.

Then, when asked if he would support Trump in 2024 if nominated, McConnell replied: “The nominee of the party? Absolutely.”

After Mitch McConnell said a number of senators are likely to run in 2024, @BretBaier asked what he would do if Trump was the nominee: “If the President was the party’s nominee [in 2024], would you support him?”

McConnell replied w/this: “The nominee of the party? Absolutely.” pic.twitter.com/FZb9kXSiiZ

The statement was McConnell’s first mention of Trump weeks after he excoriated Trump on the Senate floor – calling him “morally responsible” for the Jan. 6 Capitol riot, despite the fact that he was acquitted of incitement.

“My point is what happened in the past is not something relevant now, we’re moving forward. We’ve got a new administration,” said McConnell, after Baier played a clip of the scathing floor speech, while similarly declining to reveal whether he blamed Trump for the loss of two Senate seats in Georgia, or whether Trump should speak on Sunday Sunday at the Conservative Political Action Conference (CPAC).

“I don’t have any advice to give the former president about where he should speak or what we should say,” said McConnell, who stressed that the GOP needs to unite heading into the 2022 midterms. As The Hill notes, “Republicans hold 50 seats, putting them on the cusp of the majority, but they are also playing defense in 20 states in 2022. “