One day after we reported that China’s overnight money market rate jumped to the highest in 15 months amid i) continued drainage of liquidity by the PBOC and ii) a warning by a PBOC advisor that asset bubbles have formed in the stock and property markets, China’s overnight repo spiked even higher, surging to its highest since March 2015, as investor jitters over liquidity mounted due to the central bank’s accelerating withdrawals. 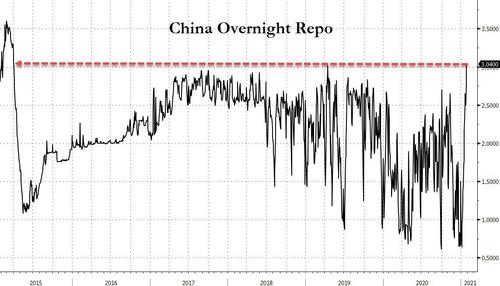 The overnight repurchase rate rose 23 bps to 3% on Wednesday and a further 4bps to 3.04% on Thursday, taking the increase this week to 59 basis points.

Such increases in January – just ahead of the liquidity-heavy Lunar New Year – are anomalous. As Bloomberg notes, “China’s money-market rates are rising fast in January, defying a seasonal pattern of decreases, amid concerns over monetary tightening.

The seven-day repo fixing rate has risen 50bps this month, the first January to see an increase since 2011 when the rate jumped only to fall back in February. The mainland’s money rates typically tend to rise into the Lunar New Year break which begins in mid-February this year.

The sudden spike in funding costs took place after the People’s Bank of China drained a net 100 billion yuan from the financial system on Wednesday via open-market operations, the most in two weeks, a day after removing 78 billion yuan. It then followed this up with an even bigger drain on Thursday, when it withdrew another 150bn yuan, the largest such amount since October.. 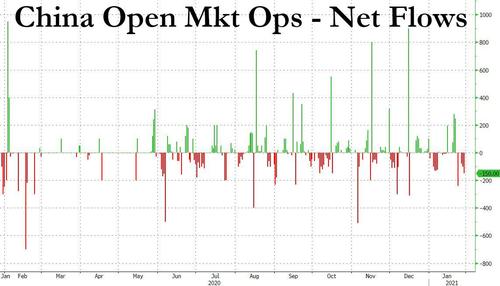 The accelerating liquidity drains – which have hammered Chinese stocks – prompted concerns among the investing community that Beijing just may be serious about its deleveraging push in 2021, a year after China injected record amount of debt into the economy to stabilize it in the aftermath of the covid pandemic.

Investors are also waiting to see how the PBOC handles the banking system’s need for funding before the week-long Lunar New Year holiday starts Feb. 11 because individuals and companies across the country will prepare cash for gifts and travel. The central bank might offer liquidity via its one-year medium-term lending facility and match the 200 billion yuan of MLF coming due on Feb. 18 even before the holiday, said Dariusz Kowalczyk, strategist at Credit Agricole CIB.

“Investors are preparing for a prolonged period of higher funding costs,” he said. “The PBOC has drained a lot of cash this week despite the high funding costs.” MLF operations are usually handled on the 15th of every month.

In an attempt to ease concerns, on Tuesday PBOC Governor Yi Gang said at a panel hosted by the World Economic Forum that China won’t “prematurely” exit from its supportive monetary policies while also keeping debt risks under control. Still, financial markets were roiled after the central bank drained liquidity on Tuesday, Wednesday and Thursday and central bank adviser Ma Jun warned about asset bubbles.

“Clearly, the market was very disappointed by the liquidity withdrawal over the past two sessions,” said Zhou Hao, an economist at Commerzbank AG. Ma’s comments also intensified concern over a faster pace of monetary policy normalization, he added.

Meanwhile, as Chinese bankers desperately await a liquidity injection, halfway around the world, reddit “autists” are taking on some of the most respected hedge funds – and winning – because there are trillions in excess liquidity sloshing around…