Dear LRC readers. I am writing to introduce you to Robert Barnes, Esq, founder of Barnes Law, LLP.

I first saw him on one of his regular podcasts, What are the Odds?, with host Rich Baris. This was a few weeks before the election and Barnes was explaining how to make bets on it. I have understood that to vote is virtually always a sucker’s gamble, but I had never seen anything about making monetary bets on politics before. On the other hand, even though I don’t care for gambling I have many friends who do. Thus, I have been to Vegas more times than I can count and to the Kentucky Derby 12 times. So I know about gambling. Furthermore, I was a member of the Society for American Baseball Research for many years. Thus, I also understand a kind of monomaniacal historical and analytical deep dive into a subject. So I could comprehend this discussion was an incredibly  thorough examination into politics like nerds and gamblers talk about sports. And he was spot on on everything, including the probability of election fraud hence the need to hedge your bets. 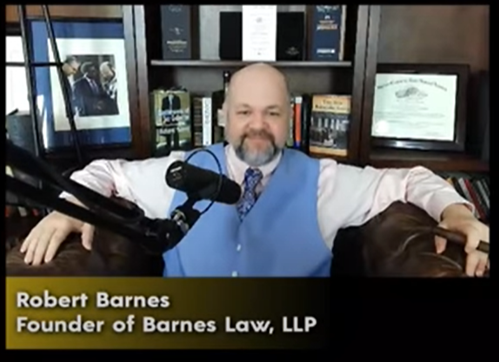 This is Barnes, always nattily dressed, always with a huge cigar, often with a glass of high quality whiskey, relaxed in a large leather chair with a couple of featured books behind him.

Charles Burris has beaten me to the punch to mention Barnes on LRC. He writes, “Not only is Barnes a master litigator and top notch attorney but one of the most in depth, articulate, well read and street-smart experienced political analysts in the nation. Whether it involves the institutionalized criminal machine cartels of the Democrats and Republicans or the deep state, he is a true polymath reminiscent of Murray N. Rothbard in his power elite analysis of Realpolitik.”

One difference between Barnes and Rothbard is that Barnes is an ultimate insider while Rothbard was the ultimate outsider. But Barnes is an insider who cares more about ordinary people than schmoozing with the elite. That in itself is representative of a very, very special character. He is incredibly well read on not only history, but perhaps of more importance, of revisionist history. Beyond sports, he seems to be plugged in to popular culture as well.

Barnes’ childhood experience of limited means has formed his approach to the law. His litigation motto is “fight for the underdog, win the impossible.” He is known for defending Wesley Snipes, the Covington kids, Alex Jones, and Kyle Rittenhouse among other underdogs. Barnes is a self-avowed populist, but with libertarian tendencies. For libertarians and followers of Austrian economics, he is preparing a crowd funded suit against the Fed (Barnes on his suit against the Fed). Hurray! And also he is preparing to bring suits to block vaccine passports as well as other forms of Covid overreach. Double Hurray! Another project is to support alternatives to Big Tech. His particular platform choice is Dave Rubin’s Locals, called VivaBarnesLaw.Locals.com. Like the Scarlet Pimpernel, he seems to be here, there, and everywhere.

His podcast partners also deserve notice. Rich Baris, the People’s Pundit, has the best track record of any pollster in America. He also uses crowdfunding to supply real polling, not fuel for propaganda. Like Barnes, Baris is a real person with understanding of real people, but also with insider understanding and knowledge.

Another regular podcast partner is the former Quebec litigator, YouTuber, David Freiheit known as Viva Frei. He started his YouTube career making cute videos, including many with his charming wife and kids. Seeing this super nice Canadien being red pilled over several months has been eye-opening in itself. But he also adds legal insight to his man in the street, straight man setup for Barnes.

For a highly entertaining and inside look of what is going on in the world I highly recommend following Robert Barnes.