As if a disproportionate rush into both SPACs and ETFs over the last few years weren’t great enough ideas on their own, they’re now in the midst of combining.

When, in the future, we look back at the ruin the market has become, we may want to remember the day that an ETF focused only on investing in blank check companies decided to “double down” on its exposure to them. For those that need clarity, this is a passively managed ETF that invests in companies with no business or operations yet.

The Accelerate Arbitrage Fund was launched in April by Julian Klymochko, Bloomberg noted on Thursday, and now has exposure to 150 SPACs. The firm is shifting its business model from boring old arbitrage to the newer, shinier and more exciting SPAC world. Why? Because SPACs have become “so lucrative”, Klymochko says.

“It’s real hard to get excited about merger arbitrage these days,” he said. 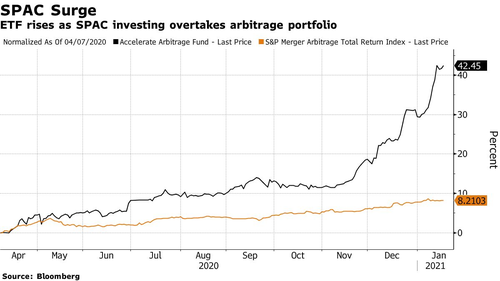 237 SPACs have debuted on U.S. exchanges in 2020, raising $79 billion, the report notes. At least 54 have started trading this year. One of the more successful SPACs to have launched in 2020 was DraftKings, while fellow SPAC Nikola drew intense criticism after being labeled “an intricate fraud” by noted short seller Hindenburg Research.

Matt Waddell, a New York-based analyst at United First Partners, says that quality of companies may be further scrutinized going forward. He believes that SPAC listings could slow to a couple a week, from dozens per day, in 2021.

And in true “passive investing” style, Accelerate says it doesn’t hold SPACs post-listing. Their goal is to get exposure prior to an IPO and then exit. It is already looking at investing in the Liberty Media SPAC and Softbank’s coming SPAC.

Accelerate says its AUM has grown over 1100% year over year.

Are ‘Never Trumpers’ The Future Of The GOP?