So much for “sticking it to the suits”.

The unfortunate reality of Wall Street is that, sooner or later, we knew that hedge fund players would emerge who capitalized on the Reddit-fueled squeezes of the last two weeks.

One such fund was Jason Mudrick’s hedge fund. Mudrick Capital Management  made almost $200 million, fueled by stakes in names that squeezed higher during the GameStop frenzy, according to Bloomberg. His fund made 9.8% in January, one of the best months since the fund’s inception. Most of its gains came from debt and equity options in AMC and volatility bets in GameStop.

The fund has $3.1 billion under management and booked most of its gains last week. It also sold about $50 million worth of out of the money call options on AMC, the report says. Back in September, AMC had “signed a commitment letter with Mudrick Capital that called for the hedge fund to buy $100 million of new secured bonds that pay 15% cash or 17% deferred interest,” the report notes. 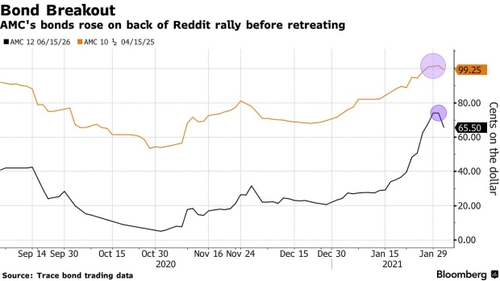 His firm specializes in distressed debt investments and is in the process of expanding further into Europe. It recently bought a credit hedge fund run by CVC Credit Partners.

As we have already noted, Silver Lake also saw about $113 million in gains from converting AMC debt it was holding to stock, before selling the stock into the rally.

Many other funds, including several of the “Tiger Cubs” weren’t so lucky, Bloomberg noted. Numerous firms with ties to Julian Robertson’s Tiger Management racked up losses during the run up: