On Sunday, when looking at the latest prime brokerage data from Goldman we noted that around mid-week the PB desk saw the “largest global short sales since May” with the GS Prime book net sold driven by short sales outpacing long buys 1.7 to 1.”

“What does all of this mean for markets”. we asked rhetorically and answered that in a week where stocks first spiked then tumbled only to reverse, and where substantial damage was done on HF P&L, immediately after a furious burst of shorting, which has pushed gross short exposure to the highest level since the start of 2020… 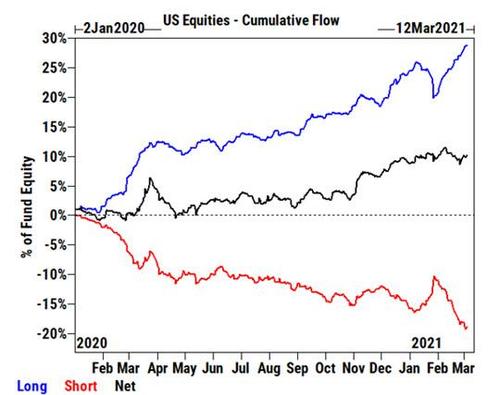 … “it is likely that the short squeeze we observed on Friday which started with the post-EU close ramp that pushed the EMini higher by over 100 points in 4 hours is about to spread and force even more forced squeezes especially now that the $1.9 trillion Biden bill has been passed by the Senate.”

This prediction proved to be painfully spot on (for the shorts) because what happened on Tuesday was an unprecedented 4% meltup in the Nasdaq facilitated by a massive 20% surge in Tesla and various other popular growth and tech stocks.

But was it a short squeeze, or merely an oversold bounce as some have defined it?

For the answer we went to the latest Goldman Prime Brokerage Service note which confirmed our previous prediction, observing that Tuesday’s was the result of “risk unwind in Macro Products vs. large net buying in Single Names” led by TMT and Consumer Disc stocks, with the Goldman Prime book net bought for a fifth straight day in which “trading flows were risk-off with short covers outpacing long sales 4 to 1.”

Just to make sure there is no confusion, Goldman prime notes that “yesterday’s de-grossing activity – short covers and long sales combined – was the largest since late January (-2.0 SDs).“

And the most remarkable observation, while US equities were (clearly) net bought, “trading flows were risk-off driven by short covers outpacing long sales 2.7 to 1.”

As Bloomberg adds, short covering in unprofitable tech firms helped the group halt seven straight days of selling and score the third-biggest net buying of the year. In fact, over the past two days, Goldman basket of the most-shorted tech stocks has jumped almost 7%, more than double the return of the Russell 3000. 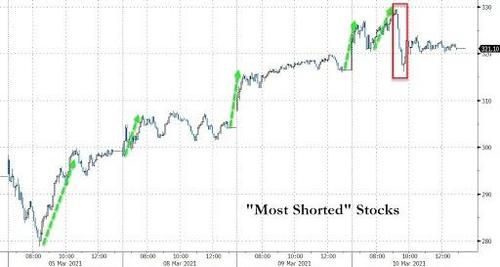 In other words, as paradoxical as it may sound, the surge was in fact a “risk off move”, and didn’t reflect appetite for risk but merely overall book degrossing as shorts have learned their lesson and no longer stay in the way of epic meltup juggernauts such as the one yesterday.

That said, with the latest iteration of shorts now out of the picture, it’s time for a new cohort of bears to take their place, and we wouldn’t be surprised if we see renewed weakness in the Nasdaq as a flood of new shorts hammers the tech index only to then suffer another massive squeeze and so on, rinse, repeat.

Commenting on the move, Andrew Brenner, the head of international fixed-income at NatAlliance Securities in New York told Bloomberg that “we see yesterday’s move as short covering without legs.” Ok fine, but tell that to any Nasdaq shorts whose legs – and everything else – was steamrolled in the historic move higher.

Hope for the Dead