Mexican President Andres Manuel Lopez Obrador has tested positive for COVID-19, he said on Sunday, adding that his symptoms were light and that he was receiving medical treatment.

“I regret to inform you that I am infected with COVID-19. The symptoms are mild but I am already under medical treatment. As always, I am optimistic. We will all move forward. Dr. Olga Sánchez Cordero will represent me in the morning to report how we do it every day” AMLO tweeted, adding that he will be on top of public affairs from the National Palace “for example, tomorrow I will take a call with President Vladimir Putin because, regardless of friendly relations, there is a possibility that they will send us the Sputnik V vaccine.”

According to a CNN Mexico report, “on Friday he was in a room with FM Marcelo Ebrard too, as they called US President Joe Biden.”

Mexico has been hit very hard by covid, with more than 1.7 million cases and 150k deaths. 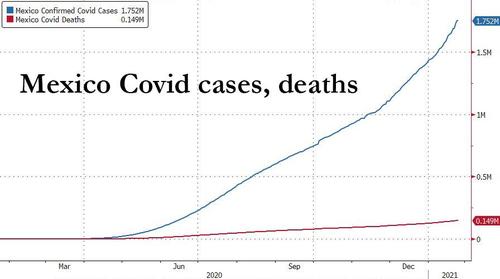 Worse, nearly a year into the COVID-19 pandemic, Mexico has entered its darkest phase yet with hospitals in many states near capacity, and ventilators and oxygen tanks in scarce supply. At a medical center erected on a Mexico City military base, the morgue has run out of space.

“In the end you’re just stacking people in piles,” Dr. Giorgio Alberto Franyuti Kelly, chief of biosecurity for the military, who treats patients at the makeshift hospital told the LA Times.

While large-scale vaccination is widely seen as the clearest way out, this last week the government announced that its inoculation program — one of the most ambitious in Latin America — had essentially come to a standstill because the country of 128 million people has received just 766,350 doses of vaccine, all produced by Pfizer-BioNTech. That figure was supposed to hit 1.5 million by the end of the month, but Pfizer now says it can’t meet that goal because it is remodeling one of its factories in Europe to eventually boost production.

Mexican officials described the delay as a minor setback and said shipments from Pfizer are expected to resume Feb. 15.

“It is simply going to be temporarily postponed,” said Mexico’s undersecretary of health, Dr. Hugo López-Gatell, who is leading the nation’s pandemic response.

Unfortunately for AMLO, the vaccine was too late to protect him from the dreaded infection.