The Minnesota police officer who shot and killed a Black man Sunday during a traffic stop, along with the Police Chief who supervised her and the department, have both resigned Tuesday after nights of rioting and looting rocked their community in the wake of the state’s latest officer-involved shooting.

In her resignation letter, Office Kim Potter wrote this without referencing the shooting: “I believe it is in the best interest of the community, the department, and my fellow officers if I resign immediately.”

kim potter the cop who killed daunte wright, has officially resigned. this was her letter to the city staff.

Shortly after the union announced Potter’s resignation, Brooklyn Center Mayor Mike Elliott told reporters Chief Tim Gannon had also handed in his letter of resignation. The developments come after trouble broke out again during a second night of protests outside police headquarters in the Minneapolis suburb, CBS Minnesota reports.

Gannon’s decision to step down comes after he was drawn into the backlash after his handling of a press briefing this week, where he made the mistake of characterizing a riot as, well, a riot.

As Chief Gannon was suffering the blowback for what would become a career-ending error, Constitutional Lawyer Jonathan Turley shared some thoughts on the long-standing effort of many in the media to avoid referring to “rioting” in states like Minnesota and Oregon where violent demonstrations against police brutality have often spilled over into wanton violence.

Even with rioting and looting in full view in the last couple nights, the networks continued to refer to protests or at most “protests turn violent.” It appears that Brooklyn Center Police Chief Tim Gannon never got the memo. As Turley recalls, the chief was scolded for calling the widespread rioting a “riot” by reporters. 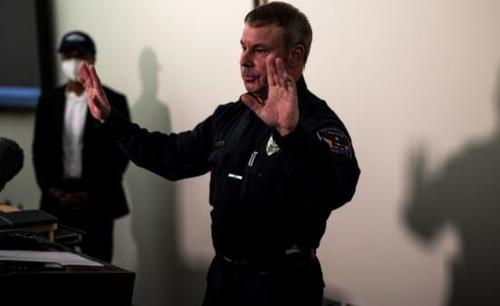 Gannon was briefing reporters when he used the dreaded “R word.” He was asked by a reporter “What was your decision to issue a dispersal order while they were peacefully protesting in front of the police station?”

Gannon responded by saying “Just so that everybody’s clear, I was front and center at the protest, at the riot.”

That led to one person to object “Don’t do that” and another exclaiming “There was no riot.” The objections were reportedly made by the press members.

Gannon was not inclined to yield to the word police:

“It was. The officers that were putting themselves in harm’s way were being pelted with frozen cans of pop, they were being pelted with concrete blocks. And yes, we had our helmets on and we had other protection and gear but an officer was injured, hit in the head with a brick … so we had to make decisions. We had to disperse the crowd because we cannot allow our officers to be harmed.”

Brooklyn Center Police Chief Gannon: “I was front and center… at the riot.”

Reporter: “There was no riot.”

The rest is authored by Jonathan Turley, in a post entitled “Don’t do that”: Reporters tell police chief not to use the term “riot”.

The scene was reminiscent of last year when Craig Melvin, an MSNBC host and co-anchor of “Today,” tweeted a “guide” that the images “on the ground” are not to be described as rioting but rather “protests.”  He noted “This will guide our reporting in MN. ‘While the situation on the ground in Minneapolis is fluid, and there has been violence, it is most accurate at this time to describe what is happening there as ‘protests’ — not riots.’”

Conversely, there is a clear effort in the media to not refer to the Jan. 6th violence as a “riot” as opposed to “an insurrection.” The nomenclature reflects a tight control of how these stories are being framed by the media. The concern is that there is more effort in framing than reporting these stories by some in the media.

There is no question that the violence in Minnesota began as a protest and many engaged in peaceful demonstrations.  However, what occurred over the last two nights was clearly rioting as Chief Gannon stated.  The fact that people felt justified in telling the Chief to conform his own language to fit a narrative is astonishing. 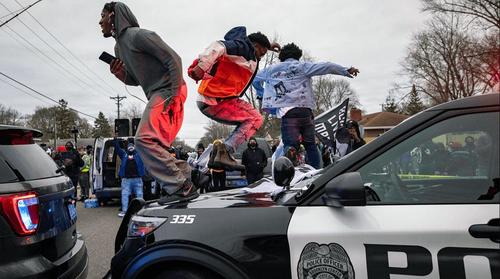 The scolding of Gannon followed another reporter lashing out at Brooklyn Center City Manager Curt Boganey, before he was fired, because he thought it would be “inappropriate” to release the officer’s name during the news conference. A reporter immediately challenged him that :

“What was inappropriate was killing Daunte Wright… You are working harder to protect a killer cop than a victim of police murder.”

Another reporter declared “racial profiling … happened in this situation. We are standing in solidarity and calling for the firing of this officer.”

There are growing calls for advocacy in journalism. This includes academics rejecting the very concept of objectivity in journalism in favor of open advocacy. Even Columbia Journalism Dean and New Yorker writer Steve Coll denounced how the First Amendment right to freedom of speech was being “weaponized” to protect disinformation. Censorship and advocacy journalism have become articles of faith for many in showing their commitment to racial and political reforms. The result however has been the steady decline in trust for the media.