“Mistakes Were Made”: Plan To Rename 44 San Francisco Schools Placed On Hold

The San Francisco Board of Education has halted its plan to rename 44 schools until students and teachers are able to return to classrooms, after serious errors were made in the selection process, which was based on cursory Google searches and Wikipedia entries.

“I acknowledge and take responsibility that mistakes were made in the renaming process,” said board Commissioner Gabriela Lopez. in a Sunday night statement, according to the Sacramento Bee.

I also acknowledge and take responsibility for mistakes made in the building renaming process. We need to slow down and provide more opportunities for community input – that cannot happen until AFTER our schools are back in person.

Lopez’s comments come days after parents began circulating a petition to recall her, along with Vice President Alison Collins and Commissioner Faauuga Moliga for politicizing education, according to the San Francisco Chronicle.

“We are parents, not politicians, and intend to stay that way,” said organizer Siva Raj in a statement to the Chronicle. “We are determined to ensure San Francisco’s public schools provide a quality education for every kid in the city.”

On January 26, the board announced that dozens of public schools must be renamed for failing to meet their standards. The mostly historical figures on their no-no list include; Abraham Lincoln, George Washington, Thomas Jefferson, Theodore Roosevelt, John Muir, Robert Louis Stevenson, Paul Revere, and Dianne Feinstein.. 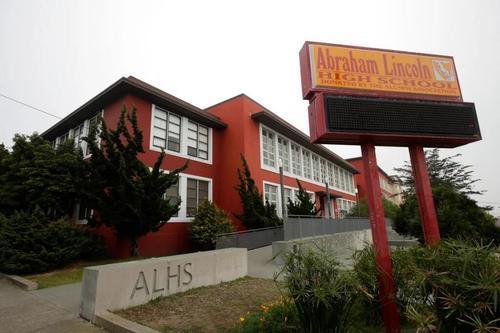 As The Atlantic noted in January, the decision process was a joke:

The committee’s research seems to have consisted mostly of cursory Google searches, and the sources cited were primarily Wikipedia entries or similar. Historians were not consulted. Embarrassing errors of interpretation were made, as well as rudimentary factual errors. Robert Louis Stevenson, perhaps the most beloved literary figure in the city’s history, was canceled because in a poem titled “Foreign Children” in his famous collection A Child’s Garden of Verses, he used the rhyming word Japanee for Japanese. Paul Revere Elementary School ended up on the renaming list because, during the discussion, a committee member misread a History.com article as claiming that Revere had taken part in an expedition that stole the lands of the Penobscot Indians. In fact, the article described Revere’s role in the Penobscot Expedition, a disastrous American military campaign against the British during the Revolutionary War. (That expedition was named after a bay in Maine.) But no one bothered to check, the committee voted to rename the school, and by order of the San Francisco school board Paul Revere will now ride into oblivion.

The committee also failed to consistently apply its one-strike-and-you’re-out rule. When one member questioned whether Malcolm X Academy should be renamed in light of the fact that Malcolm was once a pimp, and therefore subjugated women, the committee decided that his later career redeemed his earlier missteps. Yet no such exceptions were made for Lincoln, Jefferson, and others on the list.

According to CA governor hopeful Kevin Faulconer, the board’s decision to halt the renaming is a “huge victory.”

“The San Francisco Board of Education’s decision to halt the renaming of its schools is a huge victory not just in the fight against cancel culture, but most importantly for our children,” he told Fox News in a statement. “Now that we’ve stopped this misguided revisionism, we must get our children back in school immediately, something our elitist governor Gavin Newsom refuses to do.”

Is Impeachment More Dangerous Than Trump?