Authored by Joe Carson via TheCarsonReport.com,

Actual economic outcomes and not forecasted ones are the new policy of the Federal Reserve. Yet, this strategy’s flaw is that it is limited to economic outcomes and overlooks or ignores financial ones. It is not a coincidence that the last two recessions resulted from asset price imbalances rather than too much general inflation.

Failure to look at asset market outcomes & excesses as an equal cause of adverse outcomes only increases the odds it will reoccur.

In a recent interview at Barron’s, Ms. Mary Daly, President of the San Francisco Federal Reserve Bank, was asked about the red-hot housing market and whether the Fed should adjust its buying mortgage securities fueling home-buying. Ms. Daly said, “People getting into housing because interest rates are lower and they can afford a mortgage is a positive development…One of the transmission mechanisms we have is to lower the interest rate. ….It has worked well. ….I see this as a Federal Reserve win. Our monetary policy transmission mechanism is working.”

The house price index published by the Federal Housing Finance Agency (FHFA) is up 12% in the last twelve months. During the 2000s housing bubble, the fastest one-year increase in housing prices occurred in 2005 when prices rose 10.4%. The current house price surge is 160 basis points above the bubble surge, and the residential real estate market value is also one-third higher than the peak of the housing bubble.

Yet, Ms. Daly sees no adverse risks in providing more monetary fuel to housing as her priorities are “to make sure that every American who wants a job has one, and inflation gets back to the average 2% inflation target.” The Fed dismissed the red-hot housing market’s dangers in the 2000s, only to confront the financial system’s near-collapse when house prices fell hard. That proved to be a significant policy error, and the risk of another one is growing with each passing day.

With equity markets at record levels, policymakers at least acknowledge elevated levels. Still, they are reluctant to act to dampen investor enthusiasm and speculation. Federal Reserve Bank of Dallas President Robert Kaplan recently commented, “There’s no question that financial assets, broadly, are at elevated valuation levels.” He was concerned “about excess risking and if excess risk-taking goes too far, whether it creates excesses or imbalances, that could ultimately create challenges..” Yet, Mr. Kaplan said he was willing to wait until 2022 to raise official rates, and even then by only 25 basis points.

Painting by the numbers: domestic equities’ market value has increased 50% or $16 trillion to $48.7 trillion in the past two years. At the end of 2020, the equities’ domestic market valuation was 2.3X times Nominal GDP, a new record high and 50 basis points (or $10 trillion) higher than the prior record during the tech bubble peak in 2000. Finance and the economy are more interconnected nowadays than in 2000, so a sharp pullback in equity values would have a more significant adverse impact. 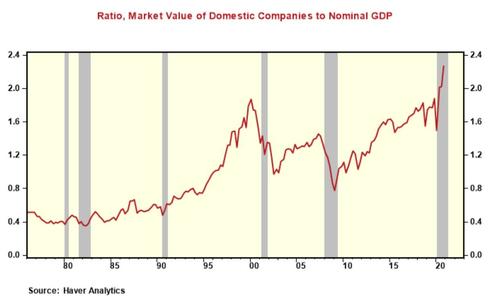 Not all asset price bubbles are alike. But after experiencing two in the past 20 years, the characteristics of bubbles are known. During the tech and housing bubbles, the Federal Reserve view was to ignore the elevated asset prices. That’s because most thought if a speculative asset bubble burst, policymakers could quickly bring down official rates to alleviate the broader economy’s damage. In hindsight, that proved to be poor judgment since both the tech and housing bubbles triggered an economic recession, with a near-collapse in the financial system following the housing bust.

The Fed’s easy-money policy has put a lot of wind at the backs of the asset markets. It’s striking to see the Fed’s willingness to maintain the scale of monetary accommodation, especially given their poor record with asset bubbles. Monetary policy (i.e., official rates) may be too blunt of a tool for practical use to deflate bubbles, but that does not mean a policy of low rates can’t create them.

Before Long “They” May Take Away Your Right To Drive

Is Jay Powell “The Yield Shield”?