In a humorous clip that made the rounds on social media overnight, Montana Sen. Steve Daines was caught on camera appearing to wax nostalgic about the good ol’ days when Montana’s basement-dwelling meth cooks had yet to be driven out of business by high-purity Mexican imports.

Sen. Steve Daines: “Twenty years ago in Montana, meth was homemade. It was homegrown. And you had purity levels less than 30%. Today the meth that is getting into Montana is Mexican cartel.” pic.twitter.com/Xtu1geaVxJ

Fans of the show Breaking Bad could be forgiven for suspecting that Daines might have been role-playing as Walter White, the show’s anti-hero, who produced a type of extremely pure “blue” meth many times more potent than the Mexican-made stuff coming over the border (keep in mind, the show is a work of fiction).

“Twenty years ago in Montana, meth was homemade. It was homegrown. And you had purity levels less than 30%,” Daines told a gathering of his Senate colleagues during a visit to the Mexican border. “Today the meth that is getting into Montana is Mexican cartel.”

Daines – who was speaking during a press conference at the border, where the Biden Administration is struggling to deflect blame for a surge in migration that’s reached crisis levels – added that illegal immigration was partly to blame for the influx of potent meth into the “Big Sky State”, before laying the blame for the state’s meth crisis at the feet of President Joe Biden.

For context, here’s an accurate visualization of how the number of migrants crossing the southern border has climbed since Biden’s inauguration. 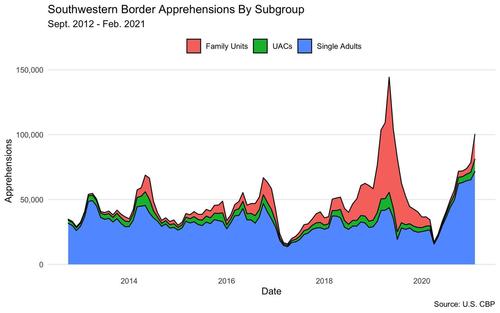 While left-leaning news outlets jumped at the chance to mock a sitting Republican Senator, others on twitter seized the opportunity to crack some jokes.

It used to be that a meth cook in Montana could support a family of 4 by working at one lab until retirement. Not anymore. Because of the influx of Mexican meth, many local cooks have to hold down three jobs delivering jenkem and krokodil in the gig economy pic.twitter.com/vi9B443xQ8

“We had our own meth. Montana meth. It was lousy, but by God it was ours. Now you have this purer Mexican meth. My God, how is a man supposed to earn a living against that?”

[sticks finger in white powder and licks it]

“The mom and pop meth labs of Montana don’t stand a chance against this cartel meth.”