As a reminder two weeks ago JPMorgan caused some serious indigestion across Wall Street, when the bank predicted that just among balanced mutual funds (such as 60:40 funds, US defined benefit pension plans, Norges Bank, i.e. the Norwegian oil fund, and the Japanese government pension plan, GPIF), there could be as much as $316 billion in total rebalancing:

Understandably, JPM concluded that “in all, we see some vulnerability in equity markets into quarter-end from pension funds entities as well balanced mutual funds selling equities and buying bonds to rebalance towards their target equity/bond allocations.”

However, perhaps as a result of client pushback, just a few days later the bank softened its tone and in a follow up note from the same quant, Nick Panigirtzoglou, JPM said that it had not taken into account the payment of the $1,400 stimmy checks, and as a result “there is a good chance that we could see a repeat of the end of last December, with a reacceleration of the US retail impulse outweighing any negative impact from pension fund rebalancing flows into quarter-end.” In other words, retail buying funded by stimmy checks could offset the pension rebal selling.

So where do we stand now?

Well, in a new report published overnight, this time from Bank of America, the bank’s strategists reaches a similar conclusion as JPMorgan, warning that “quarter-end rebalancing could be large, out of equities into fixed income,” predicting a total of $88.5BN rebalancing out of equities and into U.S. fixed income, a number which BofA finds historically significant vs. standard deviation of quarterly equity rebalancing flows over the last three years at c.$67BN.

Broken down by fixed income inflows, BofA estiamtes that $41BN would flow into Treasuries, $44BN into corporate bonds, $3BN into Agency & GSE backed securities and $c.0.5BNn Mortgages. And while part of the rebalancing flow is “likely” to have been executed at month-end in January and February, the strategists expect the larger part of the rebalance “at quarter-end reflecting the broader relative performance of asset classes throughout the quarter.”

All else equal, this would be very bearish for stocks especially in light of the chronically low liquidity in US equity markets. 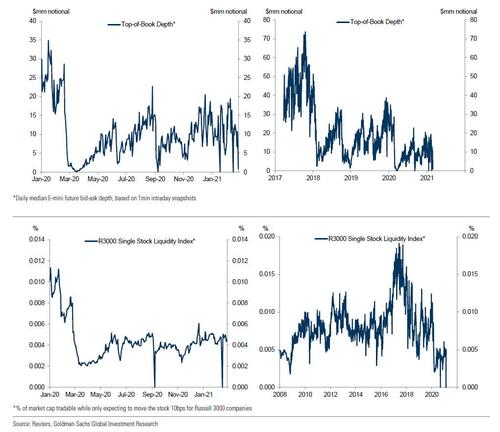 But all else is not equal, because as Charlie McElligott writes in his daily note, a sharp change in quant/dealer/vol-control signals means that pensions selling may be fully offset by mechanistic buying now that we have anniversaried the March 2020 crash.

Charlie brings attention to yesterday’s “absolute vol crush across macro Equities”, which saw the VIX decline in diagonal fashion amid persistent vol selling for the entire day, as the March 2020 VIX explosion dropped out of the 1-year lookback for vol-control funds… 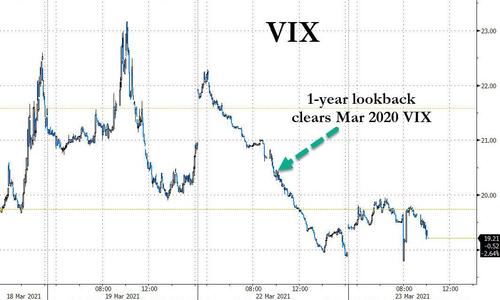 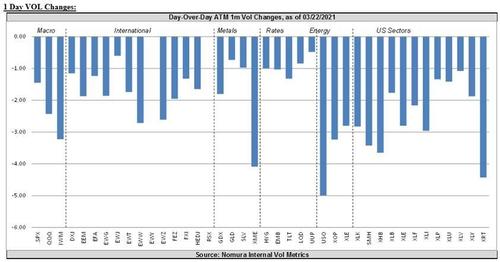 … in conjunction with further “incremental profit-taking in VIX ETNs, with the aggregate Net Vega position declining another -$6.6mm over the past 1w and now -$72mm from highs made in late Feb which has acted to soften previously very-sticky fwd implied vol.” 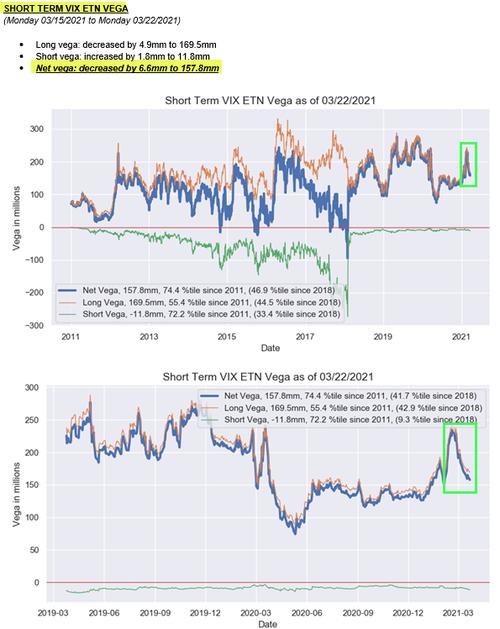 Whatever the reason behind the puke in vol, the Nomura x-asset strategist points out that he now sees time-weighted VaR calculations for Dealers coming-down, “as the 1 year ago daily market-shocks are moving out of sample from a risk-management perspective—which allows for increased Dealer ability to run incrementally more “short fwd vol / skew / gamma.”

This is a similar dynamic to the vol-control signal we have discussed here recently, and which Charlie reminds us has been reducing Equities exposure “after the jump in realized vol, which crashed-up to high implied vol over the Feb / Mar Rates selloff and Equities dispersion / rotation trades—and has then meant over $30B of US Eq MECHANICAL SELLING over the past 1m period”

But now is the snapback, and Nomura now notes that in that 1-month realized vol lookback period there was a cluster of ‘down days’ which are set to drop out of sample, “which then likely portends re-adding exposure in substantial size in coming-days IF the market’s daily changes “tighten” under the compression of a return to a Dealer “long gamma” regime.“

In other words, assuming no major market shocks, McElligott estimates up to $31.8BN of buying over the next 1 week – right into month and quarter end – but only if daily market moves are the number shrinks to +$27.2B if daily moves are 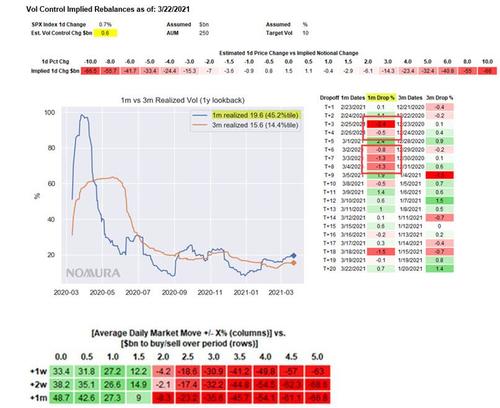 In particular, Nomura sees 3/25 and 3/29 as “large potential releveraging /exposure ADD days if daily changes are

Adding to the potential for a month-end push higher, Nomura also sees SPX Call Skew jumping, with 3m Call Skew at 92%ile (2Y lookback), while 3m Put Skew is now down to 66%ile and sharply off recent highs.

The catalyst is familiar: reopening “green shoots,” stimulus distribution, $3T+ infrastructure passed via reconciliation alongside bullish seasonality in April and May—that said, it will likely still come down to Rate Vol, which beginning in April is likely dependent on the magnitude on inflation-data “base-effect” upside beats.

In other words, there is a very high possibility – assuming there is no surge in intraday market swings/realized vol – that the mechanical buying due to lookback window shifts for the quant/vol-control/dealer communities – will effectivelly offset the month-end pension rebalancing.

If that is the case, what should investors look to for their next target? For the answer we again go to Charlie who reminds us that the S&P 4000 strike still looks a likely ultimate target with a whopping $4.8B in dealer Gamma, with 3950 also likely to provide meaningful “gamma gravity” as well, with $3.6BN in combined strikes. 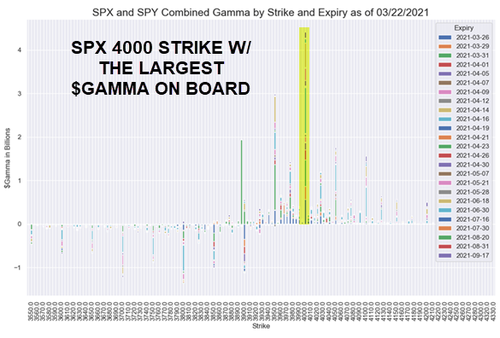