Authored by Micha Gartz via The American Institute for Economic Research,

Before Covid, an American youth died by suicide every six hours. Suicide is a major public health threat and a leading cause of death for those aged under 25 — one far bigger than Covid. And it is something that we have only made worse as we, led by politicians and ‘the science,’ deprived our youngest members of society — who constitute one-third of the US population — of educational, emotional and social development without their permission or consent for over a year. 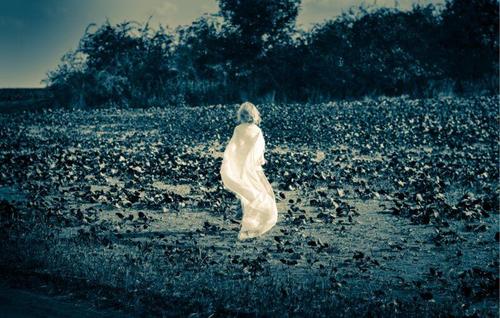 And why? For what?

We were scared. We were scared for our lives and those of people we love. And, like your average German-on-the-street in the 1930s and 40s, we believed that doing what we were told and supporting the national cause would save us and our families.

The reality is we sacrificed others without a second thought. We have sacrificed our youths’ lives and future livelihoods in a desperate attempt to save a slim minority of the elderly population who have surpassed the average US life expectancy of 78.8 years and those who were already on their way out. 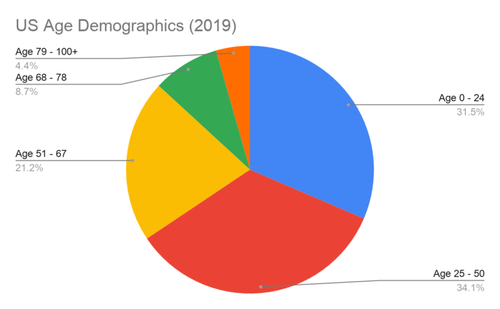 The median age — not the average, but the middle — of Covid-deaths is 80. Covid poses minimal risk to healthy individuals under 65, and is even less of a threat to youths (those aged under 25). In fact, preliminary data suggest Covid accounted for barely 1.2% of all deaths in the under-25 age group. Graphically, that’s the solid red line along the bottom of the graph below — the one you would probably miss if I didn’t draw attention to it. The distance between that and the solid pink line across the top that caught your eye? That represents the other 98.8% of deaths that had nothing to do with Covid. 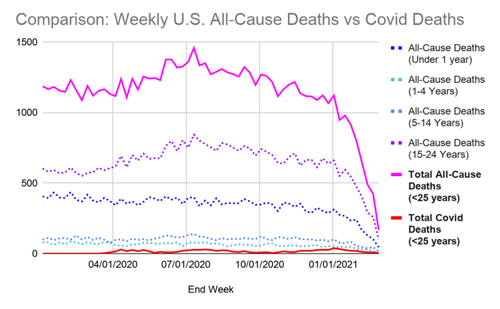 Source: Data from “Provisional COVID-19 Death Counts by Sex, Age, and Week.” CDC 2020. As data is provisional it may not include complete data for the final 8 weeks (the time period with large decline on the graph) and is subject to change.

The biggest increase in youth deaths occurred in the 15-24 age bracket — the age group most susceptible to committing suicide, and which constitutes 91% of youth suicides. Indeed, as early as July 2020 — just four months into the pandemic — CDC Director Robert Redfield remarked that there has been another cost that we’ve seen, particularly in high schools. We’re seeing, sadly, far greater suicides now than we are deaths from COVID. We’re seeing far greater deaths from drug overdose.

Although complete national suicide data for 2020 likely won’t be publicly available until 2022, Redfield’s claim is supported by the increase in calls and emails witnessed by mental illness hotlines.

Between March and August the National Alliance on Mental Illness HelpLine reported a 65% increase in calls and emails. The Trevor Project — which targets suicide prevention among LGBTQ youth — saw double its usual call volume. The jump in helpline calls hadn’t let up by the end of 2020: in November Crisis Text Line received 180,000 calls — its highest volume ever, and an increase of 30,000 from the previous month. Over 90% of those were from people under 35.

Such “deaths of despair” tend to be higher among youths, particularly for those about to graduate or enter the workforce. With economic shrinkage due to lockdowns and forced closures of universities, youths face both less economic opportunity and limited social support — which plays an important role in reporting and preventing self-harm — through social networks. “We know that participation in sports and a connection to school can have a profound protective effect,” says Pittsburgh psychiatry professor David Brent. But “the stressor that COVID represents,” says University of Oregon clinical psychology professor Nick Allen,

takes away [the] good things [in life]. You can’t go to sporting events, you can’t see your friends, you can’t go to parties. […] we’re taking away high points in people’s lives that give them reward and meaning. […] over time, the anhedonia, the loss of pleasure, is going to drive you down a lot more.

And, “while adults have had multiple years to practice stress management and build skills around that,” says YouthLine program director, Emily Moser, “young people haven’t had that.” Many of YouthLine’s callers grieved not being able to do things they normally could — from after-school activities, to spending time with friends and missing milestones such as graduations. Many of these mental health problems and suicidal behaviour created by lockdowns, “are likely to be present for longer and peak later than the actual pandemic,” according to University of Bristol suicidology expert David J. Gunnell.

Generally suicides decrease in the immediate aftermath of short-term local or national emergencies (such as hurricanes) because, as the University of Kentucky’s director of the Suicide Prevention and Exposure Laboratory, Julie Cerel, explained, “[p]eople have [a] pull-together mentality.” However, this effect appears to disintegrate over longer periods of crisis, such as in the aftermath of financial crises. Between 2008 and 2012, in the wake of the financial crisis, suicide was the second (ages 15-19) and third leading cause of youth deaths (ages 10-14 and 20-24).

In August 2020, FAIR Health found a 334% spike in intentional self-harm claims among 13–18 year olds in the Northeast compared to the same month in 2019. Nationally self-harm medical claim lines nearly doubled for this group in both March and April, while claim lines for overdoses as a percentage of all medical claim lines increased 95% and 119% percent respectively.

Suicide is already the 10th leading cause of death in the US, with one death for every 24 attempts. Yet we continue to sacrifice the well-being of 103.3 million youths — equivalent to roughly 31.5% of the US population — out of fear for a fraction of the 4% that live past the average life expectancy of 78.8 years.

Why are we even attempting to subject the entirety of the US population to isolation and ineffectual mask-wearing, instead of supporting voluntary focused protection for those who actually need it? And why do we continue to deny all groups the opportunity to enjoy and celebrate life when, after one year, deaths from and with Covid — number 520,000 — and are barely equivalent to 0.16% of the population?

If you or someone you know needs help, call the National Suicide Prevention Lifeline: 1-800-273-8255