Figures announced by the CDC show the number of health-care workers, long-term care home residents and other “essential” personnel who have received doses of the COVID-19 vaccine has passed 1MM (the exact number is 1,008,025, with another 9,465,725 distributed to hospitals and providers around the country.

We’re one week in, and while 1MM is a huge number, we’re still far away from the 20MM goal that Operation Warp Speed set for the end of the month.

These data are accurate as of 0900ET.

Moderna has only just started shipping and administering its vaccines this week (Dr. Fauci famously received a dose of the Moderna vaccine yesterday, then complained earlier today that he was feeling some soreness around the site). Pfizer started delivering vaccines a week ago in a highly publicized rollout that included video coverage of the first trucks leaving the Pfizer distribution plant in Kalamazoo, as well as coverage of the first American to receive the vaccine: a New York City emergency room nurse. Coverage of Vice President Joe Biden was also widely shared.

On top of these dose numbers, scientists have discovered that some doses actually contain excess quantities of the vaccine, allowing supplies to be “stretched”, so to speak.

Bloomberg reported the other day that the leading states actually aren’t New York and California, as one might expect, but instead rural states with intense need including West Virginia (the last state in the US to confirm a COVID case), followed by North Dakota, South Dakota, Colorado and Maine. 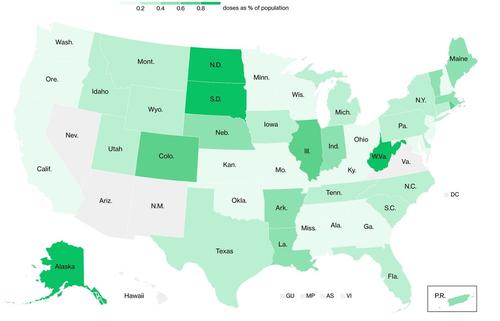 Supplying vaccine doses to rural areas (many of which also represent parts of Trump’s base was, according to Operation Warp Speed, a priority to ensure that big cities with lots of resources, like NYC and Washington, sucked up outsize quantities of the vaccines. After all, bioethicists have warned that black markets for the vaccine will likely form as more doses are shipped.

Following the Trump Administration’s latest deal to secure another 100M doses of the Pfizer-BioNTech vaccine, Washington has secured roughly 1 billion doses, enough to vaccinate the entire US population, with another 150MM to spare. Of course, the US struck all of these details as a part of a diversification strategy, the premise of Operation Warp Speed.

In total, the US has signed agreements for 200MM doses of the Moderna vaccine, 200MM of the Pfizer vaccine, 100MM of the J&J (which is still wrapping up Phase 3 trials), 300MM of the AstraZeneca vaccine (which is expected to be the third to be approved in the US),  100MM from Novavax, another leading contender, and 100MM from Sanofi-GSK.

It has been reported that China has already vaccinated more than 1MM as part of its “emergency” vaccine program, but according to Bloomberg’s international numbers, China has only “officially” vaccinated 650K people. 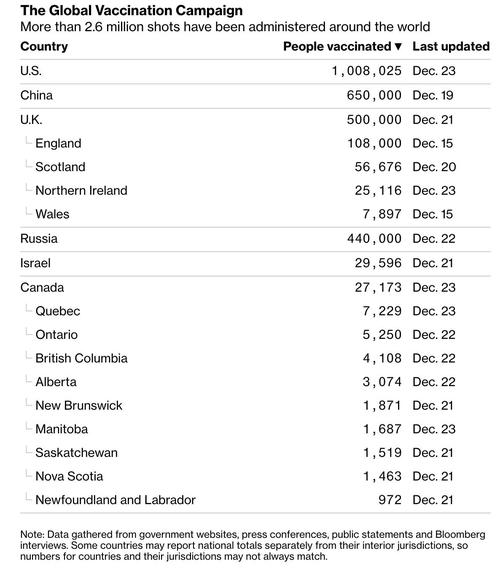 Put another way, Illinois is No. 1 in the ranking of total doses delivered, followed by California in second with 1.233MM.

Looking ahead, Moncef Slaoui, the head of Operation Warp Speed, has promised that 8 in 10 Americans – some 260MM Americans – by the summer.

Then again, with the new mutant virus reportedly on the loose, vaccinemakers are scrambling to assess whether this might be a threat. However, there are some believe tales of the mutation and its infectiousness are a hoax intended to scare the British and European public to obey stringent lockdown measures.

Infographics Confirm the Absolute Fraud in the Pennsylvania 2020 Election Results — Including the 205,000 Extra Ballots that Came In than Were Sent Out!