Morgan Stanley: “This Was A Historic Vol Shock, But It’s Almost Over”

The biggest daily increase in real yields since the Taper Tantrum (excluding March 2020) drove derisking Thursday and according to Morgan Stanley’s Quant and Derivatives Strategy (QDS) group, there is now now $25bn of supply today (which likely already hit this morning) from systematic strategies on top of $20 to $25bn in asset allocation supply. While this flow suggests weakness likely continues through month-end and potentially into next week, and much will depend on how strongly the Fed pushes back on these moves and volatility in the bond market, Morgan Stanley views this as a temporary adjustment and “would look to buy dips” as more signs of rate, vol and equity stabilization emerge. And while areas of the market with very long-duration cash flows may be more structurally impaired, “both large cap Tech NDX and cyclicals/re-opening plays should participate in the rebound once this is over.”

Thursday’s vol shock flips what was $10 to $15bn of systematic demand per week to supply: QDS expects $25bn of supply from Vol Target and CTA strategies plus $20 to $25bn from asset allocation and pension rebalancing tomorrow.  Into next week, supply will depend on tomorrow’s volatility:  a +/- 1% day means systematic flows next week should be ~flat, while another 2% on Friday would drive a $20bn wave of supply next week. On the other hand, a strong rebound – as we are now experiencing – may result in actual buying.

What about the impact of rates? While MS finds there is some sensitivity of this supply to rates directly, it’s not huge: i.e. if the US 10-year rises 10 bps alongside another equity selloff, it only adds about $5bn to 10bn of incremental supply.  Echoing the earlier observations from Nomura, MS notes that one of the key historical transmission mechanisms between coordinated stock-bond weakness and equity supply is less impactful today:  risk parity funds, and the reason for that is the persistently low leverage in the sector. With leverage only rebuilt 1/3 of the way back to pre-COVID highs, risk parity funds are unlikely to be material sellers of stock on the back of these moves, despite suffering their worst day since November 2018 (excluding the COVID period).  Risk parity models also would need to price a more sustained change in stock-bond correlation to be sellers (and even if they did, QDS only estimates they would need to sell an extra $10 to $15bn of equity). 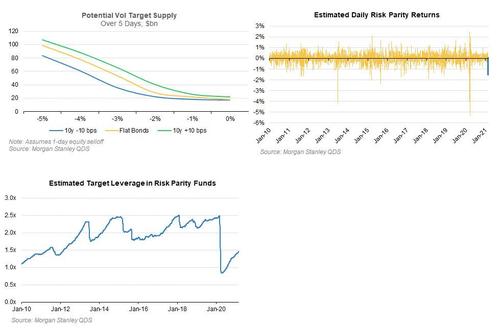 Next, and also addressing something we discussed earlier namely dealer gamma on today’s weekly op-ex, MS notes that “the increase in vol and drop in spot means dealers are likely less long S&P 500 gamma than they were for the last few weeks – dealers came into Thursday long $5bn of gamma per 1%, but that number is likely just $2bn into Friday (subject to today’s flows).” While dealers won’t flip to short gamma until below ~3650 in the S&P 500, the decline in the long position does mean that this flow that has helped reverse recent intraday selloffs will likely be less important at least for the next few days.  Whether the long gamma position gets rebuilt next week likely depends on today’s price action: on its own a 1-day shock is unlikely to deter volatility sellers, but another selloff tomorrow likely causes them to step back and wait for calmer markets.

On top of increased realized vol, implied vol is also likely to remain firm over the next few days. As QDS has previously highlighted VIX ETPs are significantly long VIX futures with institutions on the other side and this imbalance both supports volatility and makes VIX more reactive to SPX. That reactivity was on display Thursday as the VIX rose by 7.55 points while SPX fell -2.45%, which is 4.5-5 points more than what its typical beta to SPX returns would imply.

That said, Thursday’s price action clearly showed signs of active manager derisking – a barbell of secular growth + reopening has been the consensus trade since last fall, and Thursday’s underperformance of RTY and reopening plays and the NDX versus S&P suggests some of those positions were being unwound.  On the other side, Defensives and Passively-held names outperformed – which is unusual given the rate spike – suggesting that passive outflows were not a big driver Thursday.

As noted earlier in the week the underperformance of longs during this selloff is the opposite of January where a short squeeze caused more of the pain.  Long-side volatility is always more challenging to deal with, and as Joanie Kim from the MS Thematic Investment Strategies team noted in a piece today “the ongoing Momentum selloff is more meaningfully driven by the long leg and the 2nd half of 2018 selloff episode can be comparable to what’s happening today” (see A Different Kind of Momentum Selloff).  While performance cushions can help offset this volatility, as long-side volatility increases so do the chances that derisking accelerates.

Finally, turning back to the place where this all started, the spike in bond volatility signals near-term risk for both stocks and bonds, but until the market starts pricing a greater tightening of financial conditions sometime in the next year or two, this volatility is likely not going to be sustained in QDS’s view. 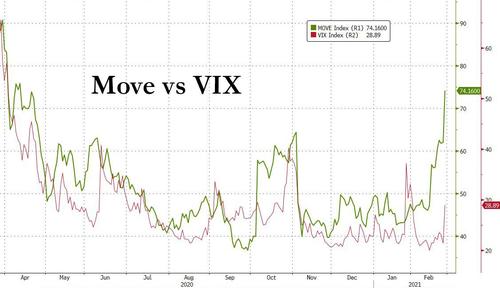 QDS continues to think that as long as the Fed remains accommodative (and the market prices this, as it still largely is with short-dated real rates deeply negative), the relationship between stocks and bonds won’t structurally change – i.e. it won’t be until yields are higher (breakevens closer to 3%) that stocks consistently go lower with incremental increases in yields. 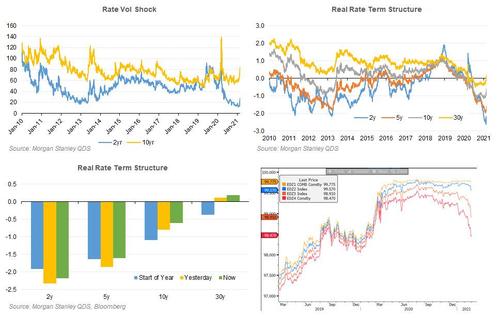 So what could change Morgan Stanley’s cheerful view on all that is happening? A few things: An even bigger spike in bond vol, sharper flattening of the real yield curve, or a pull forward in the pricing of rate hikes would all be concerning.