Specifically, Tesla saw its share of the electric vehicle market shrink from 81% in February ’20 to 69% in February ’21. Tesla still commands 69% of the market share but shows how Ford’s electric SUV is attracting EV buyers who would’ve bought a Tesla.

“BEV sales outgrew the total market by nearly 40% (EV +34% YoY adj. vs. total market -5%). Tesla’s share of the BEV market declined significantly to 69% vs. 81% in the prior year. The Ford Mustang Mach-E accounted for nearly 100% of the share loss,” Morgan Stanely wrote. 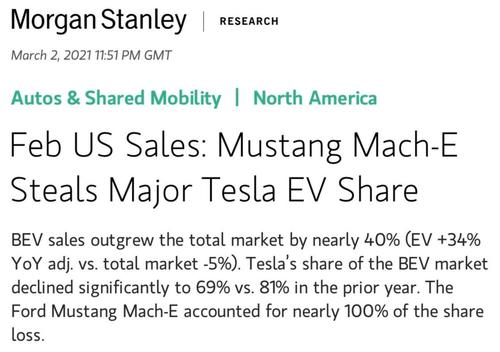 While this is huge news for Ford and its ambitions in the EV space, Morgan Stanely estimated Tesla sales last month around 21,550. Tesla still managed to outsell its competition by a considerable margin.

“It’s important to note that Tesla doesn’t break down sales as much as other automakers and registration data are not available in every state. The result is that Tesla’s sales in the market are estimates versus actual sale numbers. Tesla also allocates production to various markets differently from other automakers. Its monthly sales vary greatly month to month as it sends inventory from its Fremont factory to other markets. I would also note that Model S and Model X production was shut down in February due to the refresh and Model 3 production slowed down due to part supply issues.”

… and all this comes as Tesla shares have been priced for perfection – well, it seems some hot air is coming out of the “bubble.” 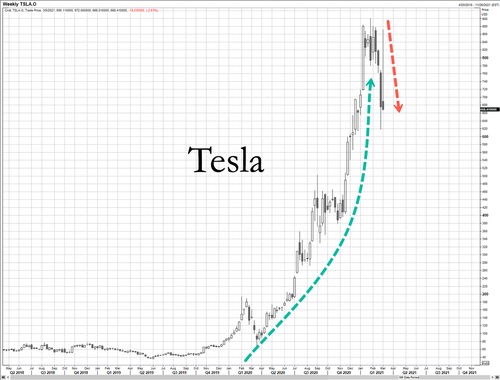