Are multiplex theaters even viable in the era of streaming and affordable big screen TVs, if studios crush the “theatrical window?” 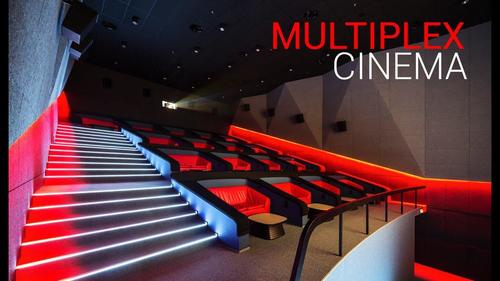 Disney will release “Raya and the Last Dragon” this Friday in 2,000 theaters and simultaneously on its streaming service Disney+ for an additional $29.99 fee, on top of the monthly subscription fee. In September last year, Disney released “Mulan” directly on Disney+ for $29.99.  In December, it released its Pixar animated movie, “Soul,” on Disney+ instead of in theaters. The entire family or a group of friends can watch those flicks when they premier, for $30, on a big screen in their living rooms. Any efforts by a studio to pull this off before the Pandemic would have caused all movie theater chains to boycott the release.

But the power relationship between movie studios and the movie theater chains has changed forever as a result of the Pandemic. Are theater chains really going to boycott a studio’s release because it’s released to theaters and in other channels, such as streaming, on the same day, rather than three months later, as specified by the traditional “theatrical window?”

Yes, they can try. Cinemark, the third largest theater chain in the US after AMC and Cineworld, is boycotting “Raya and the Last Dragon” this coming weekend, according to the Deadline today. So good luck negotiating with Disney.

The “theatrical window” – the time span between a movie’s release in theaters and its release on other channels – used to be six months. In 2010, Disney unilaterally reduced it to three months, and got away with it, and the other big studios soon followed. For consumers who wanted to watch new movies at home, the theatrical window always tested their patience.

But during the Pandemic, the theatrical window essentially went away, as movie theaters were closed, and consumers are clamoring to watch movies at home on their new big screens, now, and not in three months, and studios figured out how to leverage the exploding popularity of their own streaming services.

Meanwhile, movie theaters are barely hanging on and may be going the way of department stores, obviated by technology – broadband and affordable big TV screens – and no longer have any leverage to steer these developments.

Disney CEO Bob Chapek, speaking at the Morgan Stanley Technology, Media and Telecommunications Conference, reported by Variety on Monday, laid it out:

“I think the consumer is probably more impatient than they’ve ever been before,” he said. “Particularly since now they’ve had the luxury of an entire year of getting titles at home pretty much when they want them. So I’m not sure there’s going back, but we certainly don’t want to do anything like cut the legs off a theatrical exhibition run.”

“Obviously, theaters aren’t going to be 100% back,” Chapek said.

“But it’s nice to know that we’ve got the ability for people who do want to enjoy it in their home — because they don’t quite feel confident in going to a movie theater — that they’ve got that choice.”

“What this looks like in the future? Well, we’re going to gain a lot of experience and a lot of data points,” he said.

Disney+, which was launched in November 2019, already had nearly 95 million paying subscribers at the end of 2020. If each pays a fee of $70 a year, it amounts to about $6.6 billion in revenues for Disney, plus the extra fees for the special releases. And the service continues to draw large numbers of new subscribers. And it’s not just families:

“What we didn’t realize was the non-family appeal that a service like Disney+ would have. In fact, over 50% of our global marketplace don’t have kids, and that is the big difference,” he said.

If 50% of the subscribers don’t have kids, he said, “you really have the opportunity now to think much more broadly about the nature of your content.”

Between 2002 and 2019, the number of tickets sold dropped by 22%, despite population growth over the 17 years, according to movie data provider The Numbers. Per capita, ticket sales plunged 31% over the period. And if the theatrical window had disappeared in 2003, movie attendance would have likely plunged much more.

Then in 2020, movie ticket sales collapsed by 82% even as Americans watched more movies than ever. It is clear that there is no return back to “normal”: 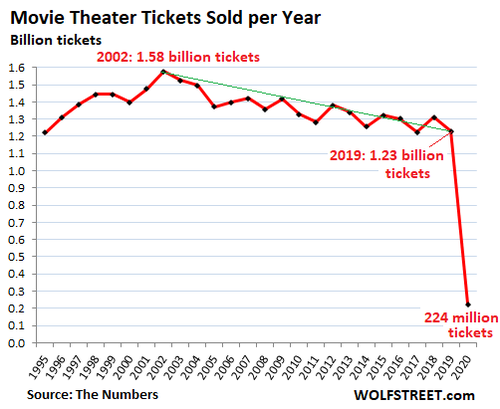 Chapek didn’t say how, after the Pandemic, the theatrical releases will be timed with Disney+. But he said that consumers won’t have “much of a tolerance for a title, say, being out of theatrical for months, yet it hasn’t had a chance to actually be thrown into the marketplace in another distribution channel, just sort of sitting there getting dust.”

Disney will ultimately let consumer behavior guide its decisions in terms of the theatrical window, he said. And one thing we already know, and Disney already knows: Consumers don’t want a theatrical window at all. They want a choice – whether to watch a new release in the theater or at home.

In that vein, ViacomCBS CEO Bob Bakish said on Tuesday that its Paramount Pictures would shorten the theatrical window to 45 days, and for its smaller movies, to 30 days. Perhaps with reference to Disney, he said, “Some of these other film moves that have been made, it’s not clear to me they’re sustainable. But this move, it puts the titles in the theaters, so if people want to go and get a big-screen experience, they can do that.”

Which makes no sense because if Paramount released the movie simultaneously in theaters and through other channels, people could choose if they want a theater experience or an at-home experience. Disney may be in the process of figuring this out, and figuring out how, via its Disney+ service, it can profit more from minimizing or abandoning the theater window than just shortening it, even if it ultimately triggers the demise of multiplex theaters that cannot compete with the combination of streaming and big screens at home.