Authored by Caitlin Johnstone via Medium.com,

The United States received a very small taste of its own medicine today as rioting Trump fanatics temporarily forced their way into the nation’s Capitol building, and now the whole nation is freaking out. 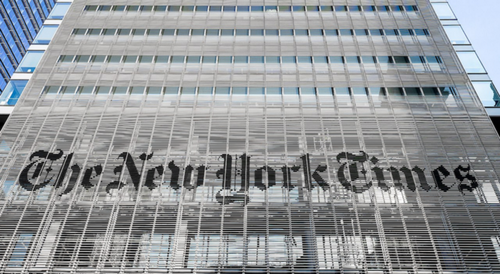 I am being generous when I say that America was given a very small taste of its own medicine; unlike the horrific coups and violent uprisings the US routinely orchestrates in noncompliant nations around the world, this one stood exactly zero chance of seizing control of the government, and only one person was killed.

I am also being generous when I say the rioters “forced their way” in; DC chose not to increase its police presence in preparation for the protests despite knowing that they were planned, and there’s footage of what appears to be cops actively letting them through a police barricade. There was some fighting between police and protesters, but contrasted with the unceasing barrage of police brutality footage which emerged from Black Lives Matter demonstrations a few months prior it’s fair to say the police response today was relatively gentle.

Future historian: “As right-wing mobs were terrorizing the Capitol, liberal truth-tellers kept their eyes on the real villain.” #BlueAnon pic.twitter.com/VNpLASbD1L

Just as predictably, it’s also got them calling for the censorship of social media.

The New York Times has published two new articles titled “The storming of Capitol Hill was organized on social media” and “Violence on Capitol Hill Is a Day of Reckoning for Social Media”, both arguing for more heavy-handed restrictions on speech from Silicon Valley tech giants.

In the former, NYT’s Sheera Frenkel writes “the violence Wednesday was the result of online movements operating in closed social media networks where people believed the claims of voter fraud and of the election being stolen from Mr. Trump,” citing the expert analysis of think tank spinmeister Renee DiResta of “Tulsi Gabbard is a Russian asset” fame. As usual no mention is made of DiResta’s involvement in the New Knowledge scandal in which a Russian interference “false flag” was staged for an Alabama Senate race.

“These people are acting because they are convinced an election was stolen,” DiResta said.

“This is a demonstration of the very real-world impact of echo chambers.”

“This has been a striking repudiation of the idea that there is an online and an offline world and that what is said online is in some way kept online,” DiResta adds.

The storming of the capital hill was organized on social media. Time to stop acting like things said online don’t translate into real-world action. https://t.co/tpEZZ2KfGZ

This narrative which seeds the idea that unregulated communication on the internet will lead to violent uprisings is funny coming from Frankel, who, as a Twitter follower recently observed, wrote a piece in 2018 condemning the Iranian government for restricting protesters’ social media access during the demonstrations at that time.

“Social media and messaging apps have become crucial to antigovernment demonstrators around the world, as a means of both organizing and delivering messages to other citizens,” Frankel wrote.

“Not surprisingly, restricting access to such technology has become as important to government crackdowns as the physical presence of the police.”

In the other article, co-authored by Frankel, Mike Isaac and Kate Conger, the message is driven home even less subtly.

“As pro-Trump protesters stormed the Capitol building on Wednesday and halted the certification of Electoral College votes, the role of social media companies such as Twitter, Facebook and YouTube in spreading misinformation and being a megaphone for Mr. Trump came under renewed criticism,” reads the article, adding, “So when violence broke out in Washington on Wednesday, it was, in the minds of longtime critics, the day the chickens came home to roost for the social media companies.”

The article reports on the US president’s temporary suspension of social media privileges for allegedly inciting violence with his posts, then discusses the various kinds of disinformation and violent ideation being circulated in Trump discussion forums.

“Those alternative social media sites were rife with Trump supporters organizing and communicating on Wednesday,” NYT tells us. “On Parler, one trending hashtag was #stormthecapitol. Many Trump supporters on the sites also appeared to believe a false rumor that Antifa, a left-wing movement, was responsible for committing violence at the protests.”

“We know the social media companies have been lackadaisical at best” at stopping extremism from growing on their platforms, Jonathan Greenblatt, director of the Anti-Defamation League, told NYT. “Freedom of expression is not the freedom to incite violence. That is not protected speech.”

Violence on Capitol Hill Is a Day of Reckoning for Social Media https://t.co/UqDuAWShfg

We will likely see many more such articles in the coming days, arguing for increased regulation of internet communication to prevent future incidents like today.

In and of itself this won’t sound terribly concerning to the average citizen. Nothing wrong with taking steps to prevent people from plotting violence and terrorism on social media, right?

But how do you predict what protests are going to be “violent”? How do you decide which protests and what political dissent need to be censored and which ones should be permitted to communicate freely? Do you just leave it up to Silicon Valley oligarchs to make the call? Or do you have them consult with the government like they’ve been doing? Are either of these institutions you’d trust to regulate what protests are worthy of being permitted to organize online?

Because the actual power structures in the United States seem to be interested in simply censoring the internet to eliminate political dissent altogether.

In 2017 top officials from Facebook, Twitter and Google were brought before the Senate Judiciary Committee and admonished to come up with policies that will “prevent the fomenting of discord” in the United States.

Friendly reminder that last year representatives of Google/Youtube, Facebook and Twitter were instructed on the floor of the US Senate that it is their responsibility to “quell information rebellions” so as to “prevent the fomenting of discord.”https://t.co/X4Hc56fH0k

Democratic Senator Mazie Hirono of Hawaii demanded, for her part, that the companies adopt a “mission statement” expressing their commitment “to prevent the fomenting of discord.”

The most substantial portion of the testimony took place in the second part of the hearing, during which most of the Senators had left and two representatives of the US intelligence agencies testified before a room of mostly empty chairs.

Clint Watts, a former U.S. Army officer, former FBI agent, and member of the Alliance for Securing Democracy, made the following apocalyptic proclamation: “Civil wars don’t start with gunshots, they start with words. America’s war with itself has already begun. We all must act now on the social media battlefield to quell information rebellions that can quickly lead to violent confrontations and easily transform us into the Divided States of America.”

He added, “Stopping the false information artillery barrage landing on social media users comes only when those outlets distributing bogus stories are silenced — silence the guns and the barrage will end.”

That sounds an awful like government officials and operatives telling social media corporations that it’s their job to censor communication which could facilitate any kind of unrest, no matter how justified.

Do you trust these monopolistic megacorporations to decide whether or not people’s dissident speech is acceptable? I don’t.

As Julian Assange is condemned to remain falsely imprisoned and the mass media ramp up their case for more imperial narrative control, we are now in a battle for the sovereignty of our very minds.

Thanks for reading! The best way to get around the internet censors and make sure you see the stuff I publish is to subscribe to the mailing list for at my website or on Substack, which will get you an email notification for everything I publish. My work is entirely reader-supported, so if you enjoyed this piece please consider sharing it around, liking me on Facebook, following my antics on Twitter, throwing some money into my tip jar on Patreon or Paypal, purchasing some of my sweet merchandise, buying my new book Poems For Rebels or my old book Woke: A Field Guide for Utopia Preppers. For more info on who I am, where I stand, and what I’m trying to do with this platform, click here. Everyone, racist platforms excluded, has my permission to republish, use or translate any part of this work (or anything else I’ve written) in any way they like free of charge.