Dr. Fauci and other health experts are warning about the prospect of a “4th wave” of COVID infections as mutated strains of the virus comprise a growing share of new COVID infections in the US, even as the JNJ one-shot vaccine promises to accelerate the pace of vaccinations. Worries about spreading mutant strains are being amplified by research showing that B.1.1.7 (first identified in the UK, also known as the “Kent” strain, after where it was first isolated and identified) might be on the cusp of becoming the most prevalent strain in the US. 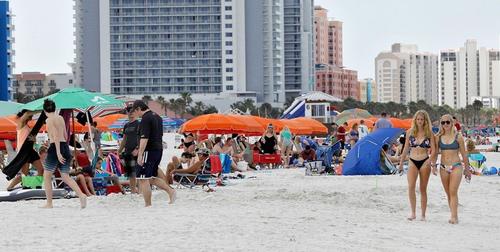 According to research cited in a note published Monday by a team of researchers at BofA, Florida is on the cusp of seeing the UK variant become the “dominant” strain in the state. And although hospitalizations, new cases and deaths have slowed in the Sunshine State, researchers are concerned that the variants are slowing the ebb of the pandemic in the state – and could possibly supercharge it. Cases and hospitalizations are still slowing in the state, just not as quickly as they were in January. 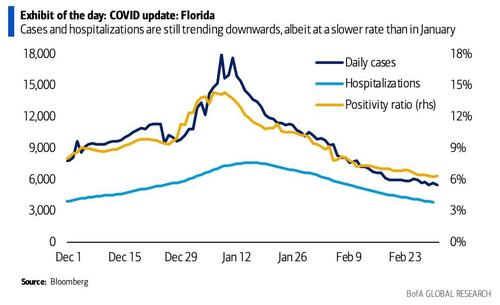 The team of analysts at  BofA said these trends have raised concerns about Florida becoming a bellwether state for the spread of the new variants, which many fear could surge as states from Texas to Connecticut move to loosen at least some (or in Texas’s case, practically all) virus-related restrictions. The fact that the state’s positivity ratio has declined since the start of the year suggests that the virus truly is receding (in other words, the lower case numbers aren’t due to solely to a pullback in testing).

Perhaps counterintuitively, the analysts at BofA are worried that the UK variant might not be as dominant in Florida as they believe. They also gamed out two additional scenarios that they said would lead to a greater outlook.

Second, vaccines might be more effective at containing the virus than we thought, by making both vaccinated people and their close contacts less vulnerable. This would be good news because the cumulative effect of vaccines should increase quickly as the roll-out gains momentum. The third explanation, which is least likely in our view, is that the B.1.1.7 variant is significantly less contagious than widely estimated. This would probably be the best news of all.

But Florida isn’t the only state struggling with COVID mutations: The B.1.526 variant that is believed to have originated in New York State is also raising concerns, according to BofA. New York cases have dropped more slowly than in the rest of the country, and have flat-lined in the last ten days. Hospitalizations are still falling, but, as the analysts remind us, they are a lagging indicator. 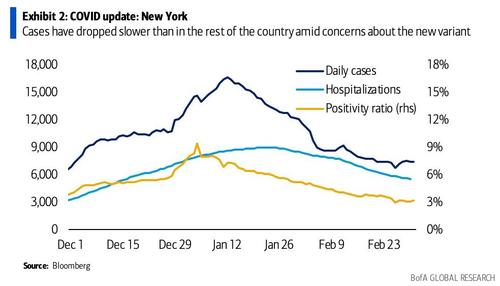 Thanks to these trends, the Empire State now has the second-highest number of confirmed cases per capita in the country, after New Jersey (both are higher than California, which leads in total cases, though it’s massive population makes for a lower ratio).

However, because the testing rate in New York is about 3x the national average, the positivity ratio – measuring number of positive cases vs. total tests – in the state has been steady at around 3.2% for about a week, compared with the national average of nearly 5%. So, while New York might be feeling the impact of the new variant, the team at BofA doesn’t see reason for alarm until the positivity rate moves significantly higher.

Looking at the US in total, the analysts at BofA believe new COVID cases could climb in the coming weeks due to the growing presence of the new mutant “variant” strains. Fortunately, they only expect a modest rise through the end of April, after which, they believe, case numbers will move lower again.

Of course, all of this depends on how effective the first generation of vaccines is in offering protection to patients from the growing number of mutant strains.