Akin to a similar outbreak scenario aboard the same aircraft carrier which took it out of commission last year during the early phase of the pandemic, the USS Theodore Roosevelt is once again entering what essentially appears like quarantine, now undertaking “aggressive mitigation” measures after three sailors tested positive for COVID-19.

After being placed in isolation they are expected to be flown off ship. According to a US Navy statement, “The sailors’ cases were identified during random command surveillance testing, which has been taking place as part of a holistic COVID-19 mitigation effort that includes physical distancing, additional cleaning and mandatory mask-wearing on the ship, U.S. Pacific Fleet spokesman Cmdr. Myers Vasquez told USNI News.”

This suggests a wider outbreak may be in progress aboard the carrier, but so far others identified which had close contact with infected individuals have tested negative and are said to be in quarantine.

The first time the Roosevelt faced an outbreak it involved over 1,200 eventual infections, with one death, all of which took the nuclear-powered carrier out of commission, forcing it to dock at Guam and cut short its slated mission last May. Like the majority of the prior wave of infections the first time, the three sailors are asymptomatic.

Currently the carrier strike group is on its second deployment within a year, now operating in the Pacific and off a recent port call in Guam. According a Navy spokesperson, necessary precautions were taken during a late February through early January port call:

During the Guam visit, sailors were allowed off the ship, but measures were put in place to keep them from coming into contact with anyone outside their COVID-free bubble. A section of the beach was cordoned off for them, and they were not supposed to come in contact with other personnel on the pier, Vasquez said.

The US Navy further said new protocol to prevent further COVID-19 spread aboard the ship has been implemented with the ultimate goal of ensuring it remains operational. 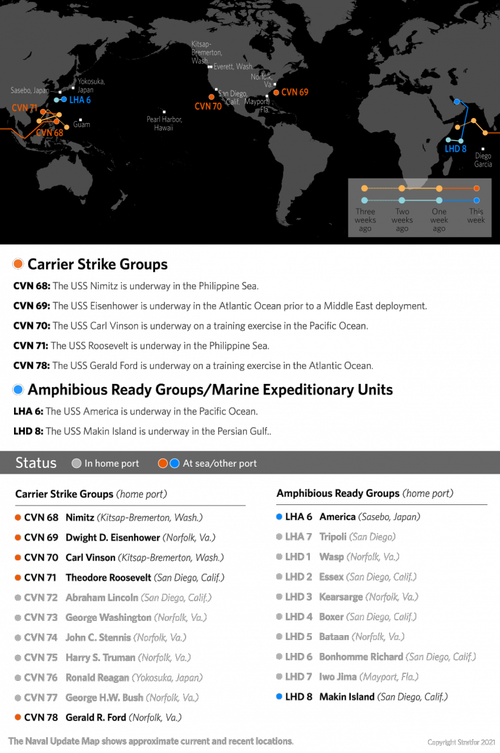 “The ship is following an aggressive mitigation strategy in accordance with Navy and CDC guidelines to include mandatory mask wearing, social distancing, and proper hygiene and sanitation practices. U.S. Pacific Fleet is committed to taking every measure possible to protect the health of our force. USS Theodore Roosevelt is currently underway and remains fully operational,” the Navy said.

The devastating rapid spread of the virus aboard the ship last spring into early summer marked a massive crisis for the Navy. It not only temporarily took the ship out of commission, but saw Chinese state media mocking the ‘weakness’ of the Pentagon’s Pacific forces and deployments at the time. It also resulted in the Roosevelt’s prior commander, Capt. Brett E. Crozier being relieved – also with the Secretary of the Navy later forced to resign over the crisis’ mishandling.