Across the US, Europe and most of the world, new COVID cases and deaths continue to decline as New York State announces more summertime reopening plans for summer camps, indoor family-entertainment centers and amusement parks and the EU strikes a major deal for more COVID jabs.

Worldwide, total case numbers are nearing 110MM, as total deaths are on the verge of breaking above 2.25MM as of Wednesday. In the US, new daily cases and deaths have plunged to their lowest levels since the fall, as projections show numbers falling even more quickly than academic projections used by the CDC had anticipated. 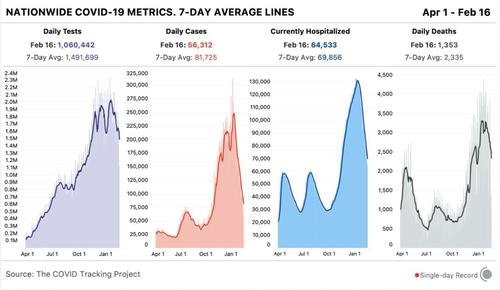 Globally, new case numbers and deaths are also at their lowest levels in months.

The first two FEMA mass vaccination centers eopen in California, Joe Biden is promising all Americans who want the shot will be able to get one by July. But even after the latest outbreak aboard a Navy ship, a top US military said Wednesday that more than 1/3rd of servicemembers are declining to get the vaccine.

During a House hearing on the Armed Forces’ response to COVID-19, Ranking Member of the Armed Services Committee Rep. Mike Rogers asked Maj. Gen Jeff Taliaferro, Vice Director for Operations, what percentage of service members have declined to receive the vaccine. Tallaferro replied that the number was somewhere around 2/3rds acceptance. 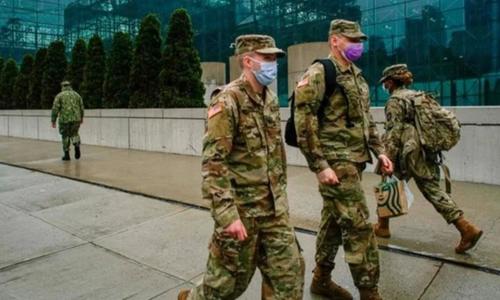 Meanwhile, despite the drop in case numbers and deaths, the NYT and its editorial writers warned that COVID isn’t done with the US yet, adding that “some signs” suggest the wave of superbowl parties across the US could spark a wave of new cases in the coming weeks, an assertion that appears entirely speculative. It added that these threats are “compounded” by the fact that new mutant strains could risk taking root despite the vaccination effort.

Outside the US, Europe finally managed to finalize a deal with Pfizer-BioNTech for 200MM more doses of their vaccines, as well as for another 150MM Moderna jabs.

Meanwhile, Auckland’s three-day lockdown is coming to an end end after authorities expressed confidence that the latest community outbreak is contained. Auckland will move to Alert Level 2 at midnight on Wednesday, allowing schools and businesses to reopen. Prime Minister Jacinda Ardern added that the remainder of New Zealand will move to level 1, meaning people no longer have to observe social distancing or limit the size of gatherings, as cases in the country are essentially back at zero.

Finally, in France,  officials extended the duration of quarantine to 10 days for those who test positive in the northeastern part of the country where virus circulation and the prevalence of new mutant strains is particularly high.