In an abrupt reopening U-turn, New Jersey Governor Phil Murphy has just decided to halt the Garden State’s reopening plans as its total case count surges to become the highest in the US. The decision follows an announcement on Friday that capacity at gyms, restaurants, hair/nail salons and other “recreational” businesses would be raised to 50%. The number of people allowed at outdoor gatherings has also doubled to 50 from 25. 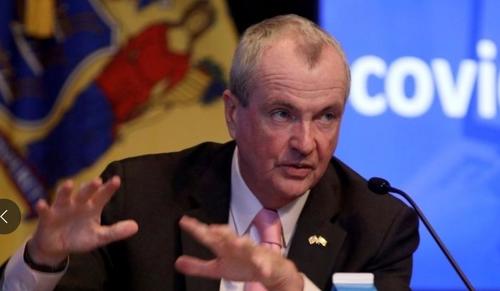 However, during an appearance in CNN Monday morning, Murphy proclaimed that the state “won’t be opening further capacities for some time now.” His remarks applied to “further reopenings,” meaning that he won’t roll back these new measures introduced Friday. Murphy cited the growing presence of certain COVID “variants” – ie mutated strains believed to be more infectious or more virulent – as his reason for pausing the reopening.

Murphy added that “we want to do this safely and responsibly, we don’t want to have to go back.”

Murphy tells @CNN that w/ surge in variants across NJ & NYC area, state won’t have anymore reopenings in near future. Indoor dining, other indoor businesses expanded from 35% to 50% on Friday.

Last week said not to get rid of the vaccine card, & laminate it.

In other news, NYC Mayor Bill de Blasio told reporters during his Monday morning briefing that he would urge Gov. Cuomo – whom he has urged to leave office immediately – do the same and halt reopening in the state as COVID numbers have seemingly plateaued, while a new “variant” discovered in the state stokes fears of another rebound.

Total COVID hospitalizations are at 4,355.

Sadly, there were 54 fatalities. pic.twitter.com/Ac7aHFwyGA

Most of the COVID briefing focused on the reopening of the city’s high schools.

High schools are BACK for in-person learning! Join us at City Hall. https://t.co/nmxm968Ub0

Fortunately for Cuomo, Murphy refused to join the growing chorus of Democrats calling on his colleague, NY Gov. Andrew Cuomo, to resign.

Cases have been climbing in the Garden State as the drop in US cases has more or less hit a plateau over the past few weeks. Here are the NJ numbers. 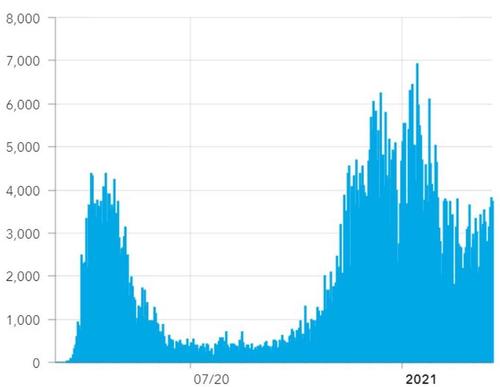 As of yesterday, CDC data showed the states with the highest average daily new COVID cases relative to population for the past 10 days are as follows:

Mayor de Blasio’s warning comes as New York City is reopening its public high schools on Monday. In California, LA’s school district announced that it plans to reopen next month.

As far as vaccinations go, 1.2M Garden Staters have been fully vaccinated, while more than 3 million doses of the three approved COVID jabs have been doled out.

It’s also not clear how many variants are actually in New Jersey right now. Murphy may address the matter during his 1300ET news conference. Of course, whether readers decide to tune in or not to hear more from the governor, it’s not hard to see that the world has an unwelcome new trend on its hands.

NJ postponing re-openings, NYC asking Cuomo to pause re-openings, Europe in a 3rd wave…not hard to see how this one could spiral…