Update (1120ET): Following in the footsteps of his colleague, NY Gov. Andrew Cuomo, New Jersey Gov. Phil Murphy has just announced a mild, but, for businesses impacted, still important, lifting of the Garden State’s COVID lockdown. Murphy is loosening indoor-dining capacity restrictions for restaurants and other businesses to 35% from 25%. Murphy also lifted the 2200ET curfew on indoor restaurant service. All changes are effective Friday. “We’re able to take this step today because the data says we can,” Murphy said during a Wednesday press briefing.

Meanwhile, across the Hudson from Trenton, NYC Mayor Bill de Blasio confirmed that New York will expand vaccine eligibility to restaurant workers, taxi drivers and people who live in homes for the developmentally disabled. Hizzoner’s decision comes in the footsteps of Gov. Andrew Cuomo’s directive to leave the decision of eligibility expansion up to localities after he decided to reopen indoor dining in the city on Feb. 14.

Barely half a day after Oxford released more data on the COVID vaccine it developed with AstraZeneca (data that failed to stop France from limiting vaccinations to people under the age of 65) AstraZeneca and Oxford are now coming together to reassure the public that yes, of course, they are already working on an updated version that provides added protection against the mutated vaccination strains. 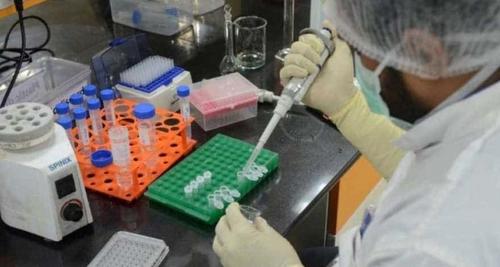 In other news on the vaccine front, GlaxoSmithKline agreed to work with CureVac to help boost production of the latter’s experimental vaccine and improve the shot to help protect against COVID mutants.

Meanwhile, the WHO has, after a year-plus of trying, finally gotten a team inside the Wuhan laboratory that has been at the center of a US intelligence investigation into the origins of the coronavirus.

In the US, officials continued to see a decline in daily case numbers, while deaths also appeared to decline. 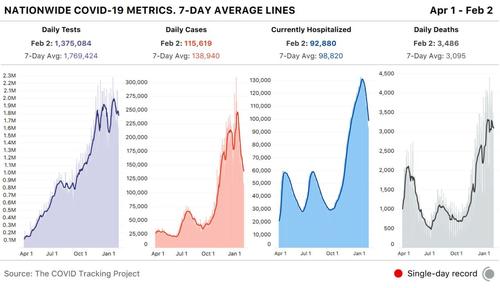 Meanwhile, the number of hospitalized patients, seen as a leading indicator for deaths, continued to slide as well. 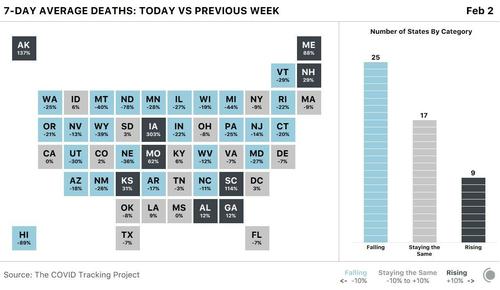 Still, a handful of states are in that 500K+ category.  A smaller number of people are being sickened by the virus, according to the latest data, which found that last week saw the lowest number of new cases in the US since November. 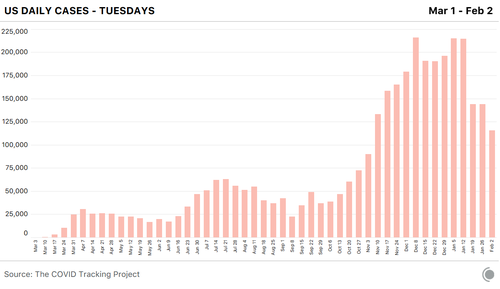 On the other hand, as we have noted, more Americans have now received at least one dose of a vaccine than have tested positive for the virus since the pandemic began. So far, 33.7MM doses have been given, according to a state-by-state tally, cited by Bloomberg. An average of 1.32MM doses per day were administered during the last week.

Globally, the world has counted more than 103MM COVID cases, with more than 2.26MM deaths.

Here’s a roundup of other COVID news from overnight:

Finally, German Chancellor Angela Merkel has boosted the number of Army troops helping in the fight against the pandemic by 5K to 25K and will call up more reservists as well, as is under increasing pressure to speed up a lagging vaccination program. In other news, NYC’s health commissioner, Dave Chokshi, has tested positive for COVID-19.

The Matrix Revealed: The trick behind Occult systems