New Year’s Week Storm Could Cause Havoc Across US

A new storm will sweep across the country next week, just like the last one, from Southwest to the Plains to Midwest to East, spreading rain and snow along the way.

As 2020 concludes and 2021 is just days away, it appears more wicked weather is on the way. The storm will unfold in two phases, according to The Weather Channel. 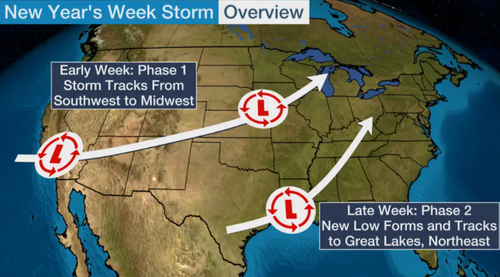 The first phase will begin on Sunday night.

San Francisco and Los Angeles will be hit with heavy rain, strong winds, and mountain snow.

By Tuesday into Wednesday, the storm will traverse the country’s central part with heavy snow for Iowa, Minnesota, and Wisconsin. Rain is expected along the Mississippi River Valley with severe thunderstorms in Texas.

The second phase of the storm will begin mid to late week.

By New Year’s Eve, heavy rain and thunderstorms are expected in the Gulf Coast and Tennessee River Valley regions. Rain and wind are also expected in all major Mid-Atlantic and Northeast cities.
More snow could develop in the Midwest and Great Lakes. A wintery mix could be seen in northern Texas and parts of Oklahoma. Portions of the Northeast near the Canadian border could see accumulating snowfall.

Meteorologists at BAMWX have analyzed “103 of the ensemble models” for the New Year’s Eve/Day storm potential.

So far there is no consensus as the models continue to make drastic west shifts with every new run.

The accuracy of the weather models will greatly improve in the next couple of days, nevertheless, if you’re planning on traveling and mixing with other households around New Years, be careful, a potentially powerful storm could be headed for the Eastern US.

Your Group Sets Off a Bomb in The Senate Building, and Bill Clinton Pardons You