We have been discussing how universities are remaining silent as student governments limit rights of free speech and association, including the impeachment of conservative students.   Now, students at Skidmore College have reportedly barred fellow students from starting a campus chapter of the conservative group Young Americans for Liberty (YAL). In Rochester Institute of Technology, the student government has impeached student Senator Jacob Custer for defending campus police officers wearing Thin Blue Line masks. In both controversies, there are appeals or reviews being pursued but students were subjected to weeks of abusive campaigns for the exercise of their free speech and associational rights. 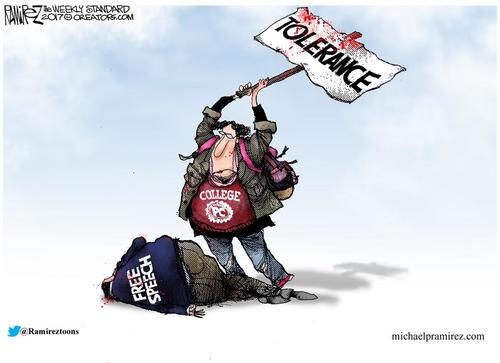 That danger is evident in the account of Hannah Davis of how she was the subject of a campus campaign and petition to prevent her founding a YAL chapter. According to the Albany Times Union, the Skidmore Student Government Association told Davis she could not establish a YAL chapter because the formation of the group triggered “concerns of hate speech and … students on campus feel unsafe.”

According to the Times Union, the anti-YAL petition was authored anonymously and denounced YAL as a springboard “for hate speech and bigotry disguised as political discourse.” It also claimed that “Skidmore has become increasingly hostile to BIPOC (Black, Indigenous and people of color) and marginalized students. It is no coincidence that this club is being proposed following months of bold activism by students of color.”

Skidmore College president Mark Connor said: “The student leaders whom our students have elected as their representatives have the right to vote to decide the outcome of this process I encourage all members of our community to exercise their freedom of speech and freedom of association and to engage with each other with patience, courtesy and respect for one another.”  Connor’s statement is disappointingly vague. He added:

“These fundamental rights apply to all, regardless of political persuasion or other differences, including views and beliefs. The rare exception would be hate speech, in which violence is clearly the goal, which would not be tolerated in our community. As always, I encourage all members of our community to exercise their freedom of speech and freedom of association and to engage with each other with patience, courtesy and respect for one another.”

There is nothing that one could object to in that statement but also little worth repeating. YAL is clearly a very conservative organization that is involved in both political and academic events.  The question is whether Connor would have been more proactive and clear if this was a campus effort to ban other more popular groups. Connor said that the conservative students could appeal but universities need to speak early and strongly in support of free speech and associational rights in such controversies.

In attacks on professors, we have also seen a sharp difference in the level of support voiced by university officials depending on the content of the viewpoints. Indeed, we have seen schools refuse to apologize when they effectively fueled false allegations.

When conservative faculty or controversial speakers are targeted, few officials or fellow professors have stepped forward to denounce such campaigns. The same is not true when controversies have arisen for statements on the left. We have been discussing efforts to fire professors who voice dissenting views on various issues including an effort to oust a leading economist from the University of Chicago as well as a leading linguistics professor at Harvard and a literature professor at Penn. Sites like Lawyers, Guns, and Money feature writers like Colorado Law Professor Paul Campus who call for the firing of those with opposing views (including myself).  Such campaigns have targeted teachers and students who contest the evidence of systemic racism in the use of lethal force by police or offer other opposing views in current debates over the pandemic, reparations, electoral fraud, or other issues.

Over at RIT, the students went the impeachment route to punish opposing viewpoints. The controversy arose in late January and students sought to impeach Custer due to his arguments on the student government’s messaging app in support of a campus officer who wore a Thin Blue Line face mask. This has been a controversy on other campuses where some symbols are favored while others are disfavored.  For free speech advocates, the issue is not the inherent meaning or value but the basis of discriminating on the basis of content in speech regulation.

Custer defended the right to wear such masks, writing:

“Wearing such masks if they want to is not counterintuitive. It is perfectly okay for students and adults to express it since it is free speech. It is not disrespectful either. We are student government, representing all students. It is not our role to determine what idea is good or bad simply because a few members or more disagree with it and punish members of our community over something small. That is just outright censorship.”

This is clearly a much debated issue, but that is what academia is about: passionate but tolerant debate. Custer was voicing the view of many that TBL masks are not disrespectful or threatening of others. Yet, his defense of the officer triggered an immediate and anger response. According to The College Fix, one student senator wrote “[I]t’s honestly humorous that a White man is going to sit here and try to tell someone of color, more specifically Black, when something is or isn’t racist.” Another said that Custer believes that black people should be murdered: “Breaking news: Jacob Custer is angry and taking a stand against people of color because he isn’t allowed to disagree with the idea that Black people don’t deserve to be murdered.”

The student government then impeached Custer for what appears to be his exercise of free speech.

The university will only say that it is reviewing the action.

The action is a clear denial of the free speech rights of the conservative students and violates the university policies on protecting such rights:

As a private university, RIT retains the legal authority to determine the extent to which it will regulate an individual’s right to free speech and expression. RIT vigorously supports the rights of all members of the RIT Community to freely express their views and to peacefully and lawfully protest against actions and opinions with which they disagree.  RIT also recognizes that the right to free speech and expression is not absolute. It must be balanced against the university’s obligation to the principles of academic freedom and to provide a secure and civil environment where faculty, staff, and students can freely exchange ideas and openly engage in deliberation, debate and learning. Any decision that RIT might take to regulate speech or expression by members of the RIT Community, shall be based on RIT’s commitment to foster a safe and civil environment where differing views and opinions are expressed.  Open-mindedness, civility, respect, decency, and sensitivity for the opinions and rights of others, however different from one’s own, are crucial to fulfilling the university’s academic mission.

While the statement seems to emphasize the right to regulate rather than protect speech, this action is clearly in contravention of the policy.

The university did little during the campaign or the petition to make clear that all students will be guaranteed the rights to free speech and association. Recently, RIT President David Munson declared:

“Earlier today, we learned that the Student Government Senate voted to uphold the Standards Review Board’s decision to impeach an elected member of the Student Government Senate. We felt strongly that it was proper and necessary for the Student Government to follow and complete the process outlined in their Student Government Bylaws, …However, the question of whether the decision may have violated university policy C.11, protecting free speech and expression, has been raised. As is always the case, the RIT President’s Office reserves the right to review any decision that may violate RIT policy. … To ensure that no RIT policies have been violated, I will be assembling a Review Panel, which will include members of the RIT Board of Trustees and others, to review the evidence and decisions from the Standards Review Board and the appeal process.”

The two controversies are the latest example of how student governments can function as surrogates to silence opposing voices and viewpoints on campuses. It is commendable for reviews or appeals to be conducted. However, the silence of these schools in both controversies has been disconcerting. Students were subjected to abusive campaigns for weeks due to their exercise of free speech.  The universities remained conspicuously silent. However, student self-governance is not a license to abuse other students or deny their speech rights. Universities cannot simply say that students “can always appeal” and do nothing to maintain the core guarantees of speech and associational rights.

I recognize that universities must be careful to honor self-governance as well as opposing free speech rights. What was missing in my view was a proactive statement from the university presidents that viewpoint discrimination would not be allowed and that, while students will be allowed to voice their opposing to viewpoints or groups, the university will not permit the sanctioning or barring of students or groups based on content discrimination.  One possible reform is to allow for the equivalent of an interlocutory appeal to the university to force a review on the grounds of raw viewpoint discrimination in certain cases like impeachments.  The alternative to is allow students to be dragged through abusive processes based on their voicing unpopular views.

Under the current system, students can create kangaroo courts that pummel students with opposing views as universities wait silent and passively for any possible appeal. The result is a chilling effort for other students who will not want to be subjected to such abuse — and have a year of responding to these attacks by the student government. The obvious result is that the majority can deter opposing viewpoints and groups by increasing the cost of exercising the rights of free speech and association.

The Dumbest Argument We’ve Ever Heard Against Cryptocurrency