NFT Mania, The Next Crypto Bubble?

This post was written with significant contribution from Nir Kabessa, a true crypto punk if there ever was one. 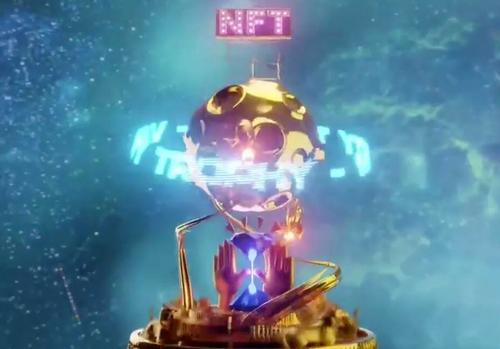 The growing boom in non-fungible tokens – digital assets that are one of one, as opposed to cryptocurrencies that are one of many – was long overdue. Applying a technology that enables digital bearer instruments to things like art, music and collectibles makes a lot of sense, and is arguably even more intuitive than applying it to money. That’s why I opened my first blockchain book by talking about the music industry.

If you spend some time reading up on NFTs in traditional publications such as the New York Times and Rolling Stone, then what you’ll detect is a collective sigh of relief. The world is slowly realizing that public blockchain networks like Ethereum enables creators to climb out of the digital dungeon they’ve been trapped in for the past 20 years.

To understand their predicament, consider this: Music consumption has exploded in the digital era, with more people listening to more music than ever before.

Music revenues on the other hand have imploded. Despite the popularity of streaming, musicians are still making less money from selling music than they did decades ago. Selling tapes and CDs had its limitations — like forced reliance on record labels who controlled the means of production — but the scarcity of those items enabled a simple business model for creators.

Digitization changed all of that, in a bad way. It’s no coincidence that the peak in the chart below occurred in the same year as the launch of Napster. Lack of digital scarcity has forced musicians to surrender to the streaming model, even though the economics are broken for many artists, and there is now yet another middleman taking a cut. 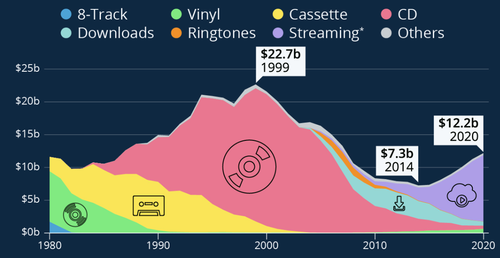 NFTs allow musicians to sell music directly to their fans. They also allow visual artists to sell digital originals. What that actually means is in the eye of the beholder. Depending on who you ask, a digital original is either the art work itself, a vague notion of originality that only the most diehard fans believe in, a cryptographic certificate of authenticity tied to an image in the decentralized cloud, or complete nonsense. Who believes which is often a function of age.

People from the generation that straddles the internet have a hard time accepting the idea that something that is only digital is worth owning. To them, possession is a physical phenomenon. Their bias is understandable, as they grew up with comic-book collections and baseball cards. Younger people have no such bias. If anything, they would rather be freed from the constraints of physical ownership altogether. They’ve already embraced digital payments over physical cash and value experiences over objects. NFTs represent both.

Younger people also grew up playing video games, and the gaming industry normalized the idea of the digital asset long ago. Many of the most profitable games make their money from selling in-game items for virtual characters — digital collectibles that can have little bearing on gameplay. There are also card-based games where users purchase digital packs to compete.

Non-gamers are often shocked to learn how much money is already being spent on in-game purchases, pseudo digital collectibles that don’t enjoy the protections of a blockchain. This segment now accounts for the fastest growing type of video game monetization. 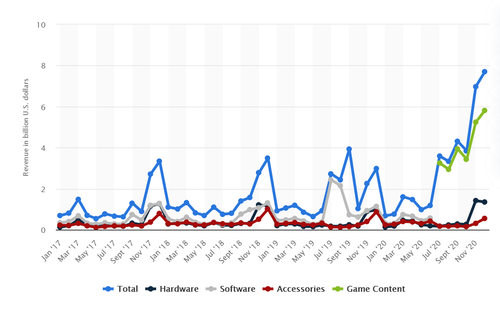 Skeptics who can’t wrap their head around all of this are often trapped inside the wrong mental model. I discovered this first hand a few years ago while pitching an NFT idea to a group of visual artists. Tellingly, they kept asking me whether blockchain would “prevent people from making digital copies.” I had to explain that the cat was out of the bag on that front. There was no way to prevent people from downloading image files or taking screenshots. But blockchain enabled one of those people to prove they owned the original, like a famous oil painting of which there are countless prints.

This analogy only confused them further, because a poster is qualitatively different from an oil painting. Then a younger artist chimed in to ask whether the distinction was a feature or a bug. He said that as a creator, he loved it when fans shared his work on social media, and would not want some low quality version to go viral. What he wanted was a way to monetize the popularity. I told him that he was in luck, because now there’s a blockchain for that.

NFTs allow artists, writers, and musicians to both sell an original AND hope for it to be copied a gazillion times. They eliminate the distinction between a higher quality original and lower quality print in a manner that benefits artists, consumers, and collectors alike. We can’t say for certain whether da Vinci would have preferred for there to be one HD Mona Lisa in Paris and a million SD versions in people’s living rooms, but many artists prefer their art to be consumed at its best, everywhere.

NFTs also enable experimentation, because a digital token can represent many things at once. They allow musicians to sell albums with a concert ticket embedded inside. They enable art markets where the original artist gets a cut of every subsequent resale. They let the NBA sell in-game moments and for influential people to sell individual tweets. They enable virtual worlds where you can buy your own virtual plot of land. They allow sports teams to engage with their fans in new ways. They enable the creation of transparent marketplaces for pretty much anything, and fantastic financialization like index funds made up of digital art (so you can use your art as collateral and borrow against it).

But NFTs also enable a new kind of crypto bubble, one that could be as big and disastrous as the ICO one. We are already seeing parabolic price appreciation for some things, and the mania is spreading. Beeple’s collection going for an astonishing $69 million at Christie’s could very well be the spark.

Part of what defined the ICO bubble in 2017 was the end game when anything that was labelled an initial coin offering would surge in value for that reason alone. All markets require a certain amount of mass delusion and “greater fool theory” to function, but bubble markets have only those things going for them. There was a point towards the end of the ICO boom when the average project had more content on its website about the coin offering than it did about the project itself. That was a tell.

NFTs could be headed in that direction, particularly now that celebrities and brand name companies are getting involved. Given the links to pop culture, this particular crypto application gets more MSM coverage than almost any other, and that sort of attention only creates more fuel. But the higher things climb, the harder they fall. As was the case with the ICO boom, there is a tendency here to conflate two different kinds of scarcity.

ICOs and NFTs can’t offer the second type of scarcity, because anyone can issue a new coin or token whenever they want, and nothing brings more supply to the market than a price bubble. A musician selling music-related tokens could always flood the market with more digital merch, and Taco Bell can produce an infinite number of digital tacos. Here, physical collectibles have the upper hand, because there are resource limitations on excess production. In other words, Nike can only pump out so many Air Jordan’s at a time. Digital kicks on the other hand are practically free to produce. It would be one thing if there were contractual limitations involved, but tellingly most of the NFT deals I’m seeing have virtually none.

Part of the charm of blockchain technology is the manner in which it can eliminate friction from economic activity. But that’s a double-edged sword, because less friction also means more (and faster) bubbles. This is a feature on the way up (we are all going to be rich!) and a bug on the way down (someone needs to go to jail!). NFTs have the potential to become the mother of all bubbles, especially during a crypto bull market where lots of people have (digital) cash to burn. 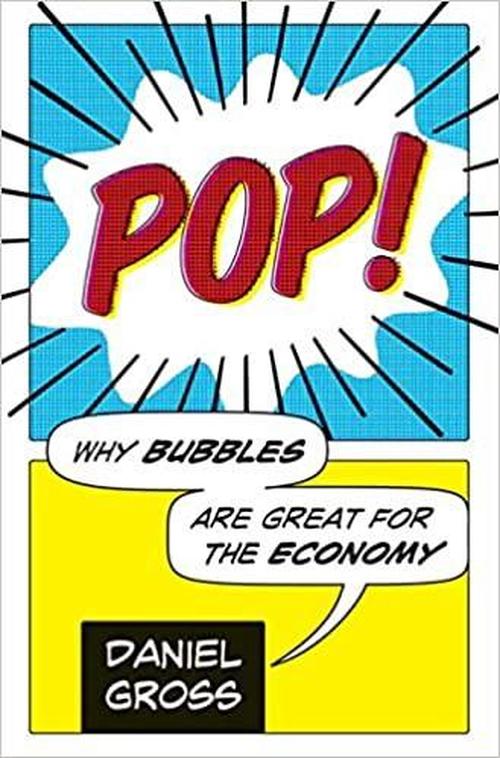 All of that said, a potential NFT bubble — just like previous crypto ones — is good for the decentralized economy. For all the flack that the ICO bubble got after its collapse, it pulled in millions of new users to the crypto economy, forcing them to learn about things like private keys and tokens. It accelerated the development of much-needed infrastructure like smart contract code and wallets. It also established fundraising as the first viable application of the technology beyond Bitcoin.

Crypto skeptics still point to that bubble as some sort of a setback, but theirs is a historically ignorant argument. New technology is often associated with an investment mania, because manias accelerate adoption. This was true for both the railroad bubble 200 years ago and the more recent dot come one. Skeptics used to make fun of pets.com too. Now online pet supplies is one of the hottest corners of e-commerce.

Those of us who’ve been in crypto the entire time can draw a straight line from all that went wrong in the ICO boom in 2017 and everything that’s going right today. NFTs could eventually do the same thing for a host of blockchain applications, transforming the worlds of art, music, gaming, and collectibles. But they need to go through their own wild boom and bust cycle first.

If you are an artist, now is a good time to (finally) cash in. If you are a consumer, please be careful. And if you are a HODLer, then you should feel vindicated. Beyond native currencies, stablecoins and DeFi, digital collectibles represent yet another killer application for public networks.

Rabo: We Have All The Bizarre, Surreal, Incomprehensible Absurdity Of Kafka