No Country For Young Men?

Here’s a fascinating look at employment trends for the past 20 years and what’s driving them. 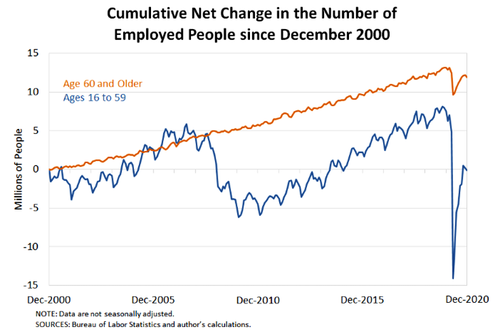 Demographics Plus the Employment Population Ratio

St. Louis Fed writer William Emmons notes the chart is a function of population growth and the Employment-Population ratio.

Yes, this is why Carl’s Jr. Is now staffed by 70 year olds instead of high school kids. Your ZIRP F’d these folks.

This reminds me of something I said just before and during the great recession. Unfortunately, I cannot find a link but it went like this.

“Parents will be competing with their kids and grandkids for jobs.”

Well here we are.

When I grew up there was hardly anyone over the age of 50 working in fast food chains.

What About Employer Health Care Coverage?

Note that Health Care Coverage for part-time employees is optional.

Those between the age of 60 and 65 cannot wait to reach the age of 65 so they can get on Medicare.

Thanks to Obamacare, younger workers pay more than their fair share as a subsidy to their parents and grandparents.

That’s the rest of the story.