No, There Was No Double-Spending In Bitcoin

As noted earlier, bitcoin has seen some profit taking in the past two days…

… which according to some may have to do with the cryptocurrency emerging as the biggest consensus bubble of the current euphoric market. 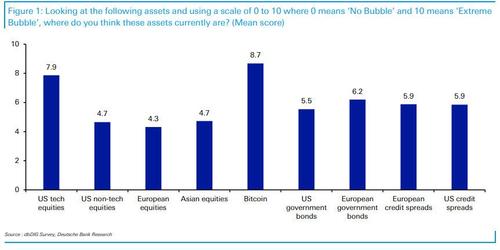 However, some traders have cited a curious observation by BitMEX Research, which early on Wednesday identified a suspected double-spend transaction valued at 0.00062063 BTC or roughly $21, which as CoinTelegraph adds, “doesn’t appear to be an instance of that popular replace-by-fee wallet hack.”

At 6 am on Jan. 20, BitMEX’s ForkMonitor noted that “multiple blocks were produced at height 666833.” BitMEX Research tweeted. One hour later, BitMEX Research attributed the orphaned block to an RBF transaction, which is where an unconfirmed transaction is replaced with a new transfer paying a higher fee. However, ForkMonitor has since updated its advice to say: “No (RBF) bumps have been detected.”:

The observation sparked concerns that bitcoin may have encountered a dreaded case of “double-spending.” Twitter-user and BSV’s Australian advocate Eli Afram noted the “mixed messages” from BitMEX Research, asserting the double-spent transaction should be cause for concern despite its small value:

“So it appears an actual Double-Spend has occurred on BTC… Not an RBF (replace-by-fee), but an actual double spend. A mere 22USD… but – this could have been 22million.”

If confirmed this would be devastating for the popular crypto asset as Satoshi Nakamoto’s Bitcoin Whitepaper is credited with having solved the double-spend problem in 2009. After all, the challenge of ensuring that a decentralized network can autonomously verify that the same coins have not been transferred more than once had stymied earlier attempts at digital cash. Until bitcoin came that is.

Naturally, those who have been bearish on bitcoin on recent days – if not for any fundamental reason but simply because they expect a sharp momentum reversal – such as Bloomberg’s Mark Cudmore jumped on the observation, and published a note on the widely-read Bloomberg Market Live blog, warning that “Bitcoin may have a serious problem”, and observing that “Bitcoin is down about 7% on the session amid reports of a potential double spend” he said that while this has not been “independently verified” it would be “cataclysmic for the cryptocurrency, as that is the whole point of what it is meant to solve.”

To his credit, a few hours later Cudmore explained why this is not a case of “double-spending” but most likely a lagged confirmation of a transaction.

While the price-action has been sharply negative, the fact that Bitcoin is still trading above $30,000 debunks the idea of it being hacked in some way. As one reader wrote in to say, it would be “already close to zero” if that was true.

A couple of readers have written in to educate me on what has happened. Double-spend attempts happen frequently. The blockchain itself has never been corrupted (that we know of). However, slow transaction confirmations open up the potential for someone to try to double spend their coins. This is why transactions being confirmed via multiple blocks are a design feature of Bitcoin, rather than a bug. Someone using a single block confirmation is arguably missing the point as this was addressed in the Satoshi whitepaper. Six confirmations (blocks) are often considered “secure.”

So while the original BitMEX report appears to have been taken out of context at best, and was “fake news” at worst, the sharp selloff that it prompted was all too real, and more importantly upside momentum has now been lost (for the time being) as Bitcoin’s drop “has taken it through the support line that had sustained its recent rally.” 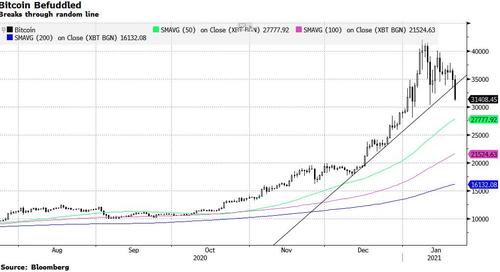 Of course, as Cudmore adds, “with no way to value Bitcoin, that’s just a random line on a chart. But cryptopundits love drawing lines on charts, and this particular line has been working well for the past few months. Bitcoin has now gone through the Jan. 12-Jan. 13 lows of ~$32,300. The next obvious line on the chart is the Jan. 11 low of just over $30,000.”

Should this matter to you? It depends: as the Bloomberg commentator concludes, “if you were purchasing Bitcoin to HODL, this story should make no real difference to you. It’s only problematic if you were buying Bitcoin as you think it’s going to be the currency of the future. But those types of buyers would appear to be in the minority nowadays, which is why negative momentum may be the only serious problem here.”

Here it is – The Bill To Destroy Gun Ownership

The Con Job Of The Century?