No Voter ID Laws Because Millions Don’t Have An ID? Let’s Buy Them One!

Authored by Adrian Norman via The Epoch Times,

The prevailing narrative about why America should not institute voter identification requirements in all 50 states is the notion that it would unduly disenfranchise millions of voters who, supposedly, don’t have and are unable to obtain a valid form of ID. 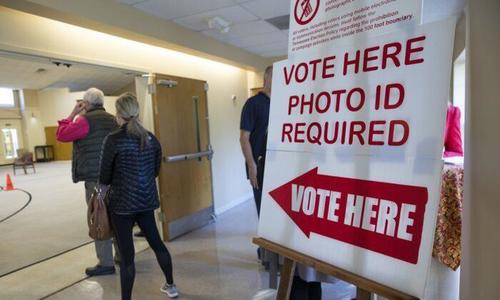 The American Civil Liberties Union (ACLU) published a report alleging 21 million Americans do not have identification. The report also cites the left-leaning Brennan Center for Justice, which purported that as many as 25 percent of blacks lack government-issued ID, compared to just 8 percent of whites.

This disparity has been used to frame an election security issue as a civil rights issue. But, America should rest easy knowing that—like many other challenges we’ve faced—this too can be overcome. Because if there’s one thing this era of pandemic hysteria has taught us, it’s that there’s no problem the U.S. government isn’t willing to throw cash at.

An apparent consequence of the pandemic is that money now grows on trees. Through multiple relief packages, the United States has now spent $6 trillion on pandemic relief. Yet the vast majority of that money was spent on pork and graft (only 9 percent of the $1.9 trillion American Rescue Act went to directly combating COVID-19). Clearly, our nation has access to money for increased election security.

The ACLU says 21 million Americans don’t have identification. So let’s get them one!

Across all 50 states, the average cost of a government-issued ID is $6.33. So, getting an ID to the folks who need one would only run to $132.9 million. But, as the ACLU notes, there are other costs for things like document fees and travel expenses, which average an estimated $125. Assuming all 21 million people need that covered too, good ‘ole Uncle Sam can cover that cost as well by shaking the giant money tree over at the Federal Reserve and getting us $2.6 billion.

And before you say “it’s too expensive,” let’s look at where some of the money has gone from the monstrous “stimmy” bills your corrupt, congressional overlords have passed.

According to Forbes: $852 million was sent to civic volunteer agencies. $270 million went to the National Endowment of the Arts and the Humanities. $200 million to The Institute of Museum and Library Services. $350 billion in state bailouts. $86 billion to cover liabilities at nearly 200 “badly managed” pension funds. $128.5 billion for K-12 education (most of which will be paid out starting in 2022, after the pandemic is over). $39.6 billion for higher education.

None of this had anything to do with “pandemic relief.” This was a heist, writ large.

And all of this insane pilfering is in addition to the annual, end of fiscal year “use-it-or-lose-it” wasteful spending our government racks up on things like inflatable games, alcohol, and strip clubs.

Our politicians have no qualms about spending trillions of dollars of U.S. taxpayer money on all manner of frivolity. The least they can do is have the Fed toss us some spare change to ensure that only legal, eligible voters are casting ballots in our elections.

Of course, that assumes they actually want our elections secure.