Nomura: Brace For A Frenzy Of Stock Buying On March 29… Here’s Why

On Tuesday, we previewed the coming month-end “clash” between forced selling on one hand, which according to JPM could be as much as $316BN across mutual funds, and vol-control and quant buying now that the March VIX surge is out of the 12-month look back window. 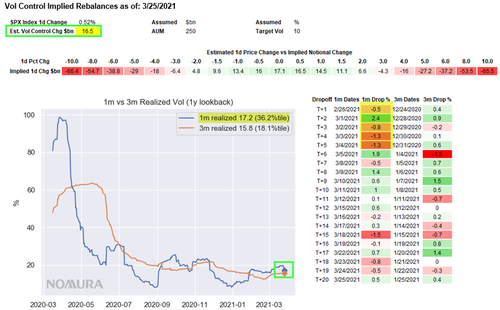 Picking up on this observation, Nomura’s Charlie McElligott notes that it was the latter of these two forces (split into two discrete “flows”) that helped reverse the tide in US equities just after the European close which coincided with a violent initial down-trade. As McElligott explains:

That explains yesterday’s action, and validates the our previous preview that month end is shaping up as a dramatic clash between two forced flows, where pension selling continues to find resistance in vol-control buying.

What happens next? Here McElligott writes that after speaking with a wide-ranging group of client types over the past few sessions, the consensus sequencing story status assessment he is hearing goes as follows:

To summarize: Vol control are adding significant equities exposure as trailing 1 month realized vol resets much lower and the string of large “down days” drops out of the recent one month sample, with March 29 set up as the next likely “big buying day.”

Congressman-Elect Luke Letlow Passes Away from COVID at 41; Louisiana Republican Was to Be Sworn in Next Week

Taking Back Our Liberty in 2022