Yesterday morning, when discussing the latest rates thoughts from Nomura’s Charlie McElligott (read here), we pointed out that while dealer gamma was now neutral suggesting the without a gamma “pin”, the market could turn volatile in the next few days, there was one cavet: vol control funds which have been aggressively releveraging in the past quarter, and are likely to continue doing so – i.e., buying stocks and bonds – as the VIX resets lower. 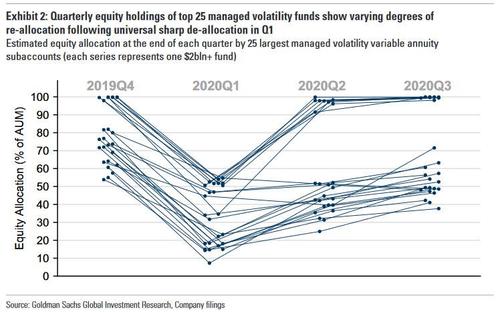 So perhaps in returning the favor, this morning our favorite Nomura quant picks up on what we said and writes that “for US Equities, systematic Vol Control is a big deal right now, acting as a surrogate BUY flow and replacing some of that prior dealer “gamma” hedging stability which has since dropped significantly post Friday’s Op-Ex.”

Using his proprietary model, Charlie then estimates that vol controls bought $3.7B on Tuesday, the largest one day notional buying since 12/21/20, although where he differs from us – and Goldman – is his estimation that the overall Equities allocation among VCs remains low at just 41.5%ile since 2011 “i.e. room to buy much more.“

Why does this matter? Because if the Nomura quant is correct, and the average SPX daily market move is just ~0.5% over the next two week period, it could results in “a potential add from vol control strategies of $40.2B of US equity futures over that period; if 0.5% for the next 1m, that VC buying would be upwards of $96.3B.“ 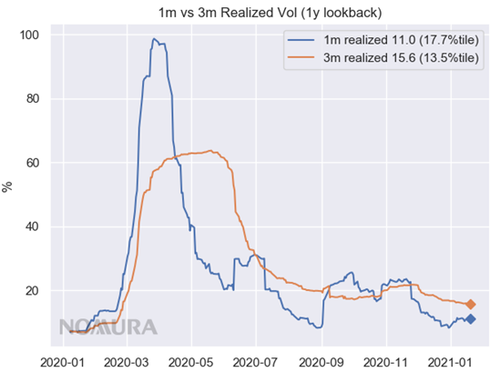 Needless to say, in this extremely illiquid market, $100 billion in concerted buying pressure would be just the catalyst to push the S&P to 3,900 if not 4,000.

And while attention turns to vol control as a potential source of substantial buying, does this mean that gamma is not a factor for the near future? Well, as McElligott writes, from options Dealer perspective and following the aforementioned post Op-Ex “gamma unclenching” plunges in major US benchmarks just as anticipated Friday, the “stickiness” within SPX now sits at the largest $Gamma strikes of 3850 ($3.22B), 3800 ($2.55B) and right in the middle at 3825 ($1.96B)—3900 however has been a growing force at now a very real $2.24B as well.

This means that looking ahead SPX Gamma vs Spot “neutral/flip” level is now at 3711/ SPX Delta vs the spot “neutral / flip” level which is also at 3711 “so client options Delta is cleaner/less extreme, while market is well-supported from said Dealer “long Gamma,” all of which is stabilizing.”

As an aside, McElligott notes that “tactically, last week’s returns across the Nomura Factor Suite reiterated the speculative nature of the current market froth, while also challenging long-term legacy “momentum” positioning which for the better part of a decade has been leveraged long secular growth bond-proxies vs short economically-sensitives.” 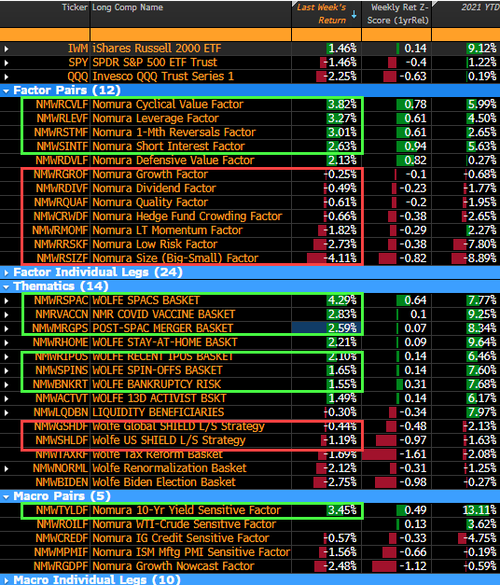 Strategically however, Charlie notes that “these are the days that reiterate the “barbell” approach to 2021… with the heaviest allocation in the “Wolfe Renormalization Basket” to play for the vaccine reopening + stimulus reflation dynamic on “Cyclical Value” / “Duration sell-off” days…while too keeping a 35% allocation to the “Wolfe Liquidity Beneficiaries” basket as your “hedge,” which will act like a UST Duration proxy / Fed “easy money” proxy into days where there is uncertainty as the reflationary growth outlook (i.e. market concerns around ability to pass “aggressively sized” stimulus).”

One final point from McElligott: after pressing their Treasury shorts, and failing to get yields materially above 1.10% – the level which we said several weeks ago was the trigger level for CTA shorting – Nomura’s CTA Trend signals in its Treasury model are now effectively “neutral” in aggregate across our 5 time buckets at just -1% “short” overall, with de minimis $ exposure now—while the 1Y window remains a very strong “long” signal, which means outsized loading at 50.4% weight and counterbalancing the 44.1% loading for the 6m window’s slightly weaker but predominate “short” signal. 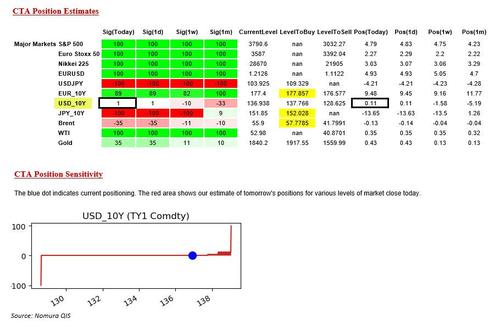 Finally, Charlie points out that Japanese rates buyers have been sparse in recent overnight sessions “generally picking spots at levels, instead voicing preference to get more aggressive on a pullback ~ 1.20” while European flows have tended to fade initial overnight Asian session rallies, while US leveraged funds are in no rush to monetize shorts yet either.

In short, having failed to break out above 1.20% last week, it now appears that 10Ys may be stuck in this no man’s land until we get another clear and decisive signal of spiking inflation.

Biden Reverses WHO Withdrawal Plan, Taps Fauci To Lead US Delegation This Week