With ‘Ramp Capital’ dead, investors are growing anxious that the huge and hotly-anticipated quarter-end rebalancing flows will overwhelm any BTFD enthusiasm (as ‘weaponized gamma’ retail players appear to have jumped ship).

As Nomura’s Charlie McElligott notes this morning, it does indeed look like the much-hyped “pension quarter-end rebalancing” flows are evidencing themselves in the market, effectively VWAP buying TY vs VWAP selling ES over the course of the day the past two sessions, as evidenced by our futures bid-ask “imbalances” monitor across all lot sizes.

Particularly looking at ES (S&P E-Mini) imbalance, we see the last two days (Pink yesterday 3/24, Light Blue 3/23) being two of the four most “sold” of the entire past month window

And this morning we are seeing a similar pattern: 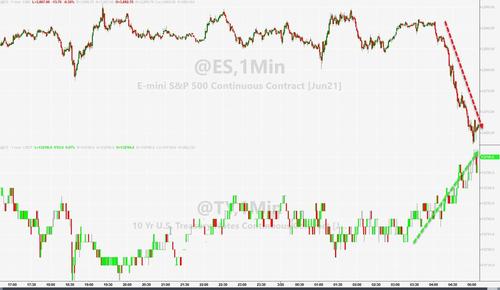 And as we have warned, McElligott note that within US Equities Options positioning, this seeming pension quarter-end rebalancing supply “sell-off” now sees Dealers “short Gamma” vs spot in SPX (Gamma vs Spot, flips at 3921.09—currently -$4.9B, 14.2%Ile), while Delta vs spot is now sitting directly on the “neutral / flip” line (Delta vs Spot, flips at 3880.57)… 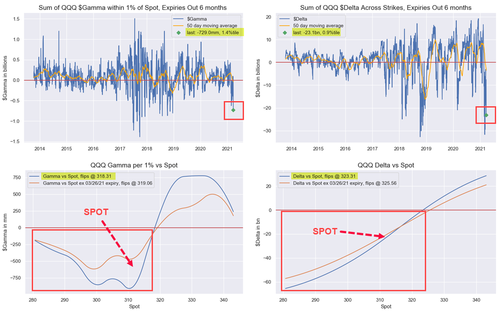 Crucially, McElligott warns that one big problem is that Mega Cap Tech exposure has been reduced into not just the “Cyclical Value” rotation on “reflation renormalization + stimulus” narrative…but also, the past year’s speculative euphoria into “Unprofitable Hyper-Growth” stocks as well… 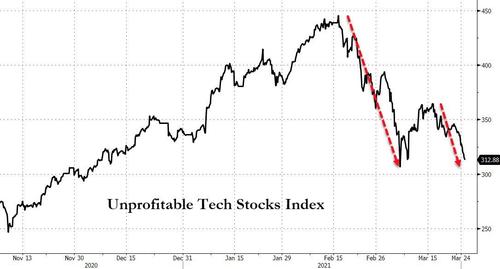 HOWEVER, the leak in the “Speculative Frenzy / Unprofitable” stocks has now accelerated in the recent trading window: 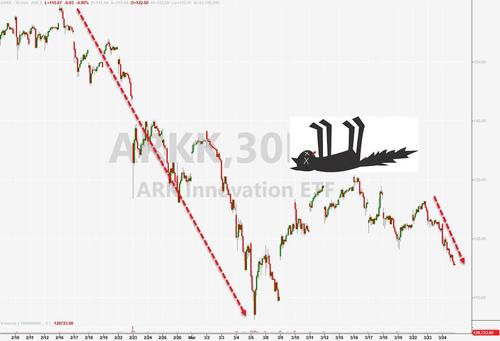 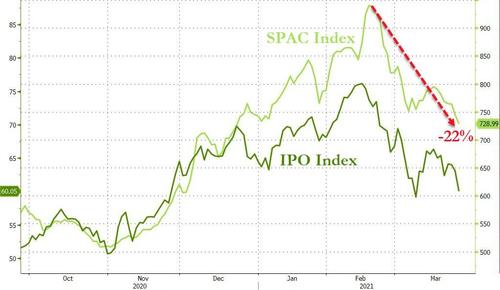 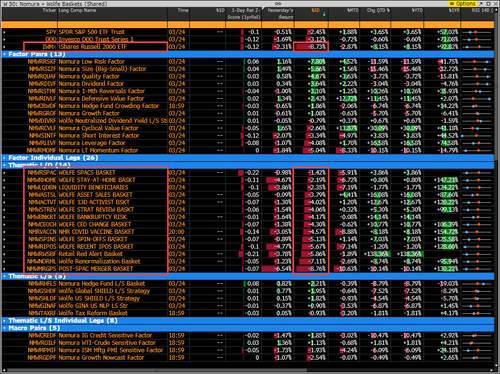 And this too is also part of the theory behind the rollover in total US Equities Call options volumes as the Retail “weaponized Gamma” horde steps back after lighting so much premium on fire with deep OTM upside purchases over the past 1.5 months , much of which has expired worthless

Finally,as we previously noted, there is another reason why call-buying is fizzling out: Daytraders are learning and adapting, and instead of amplifying their returns with leverage (call-buying overlays), they are hedging their positions… which removes one more marginal enabler of the meltup.

And unless Powell and his pals accelerate the buying once more, we suspect the markets will really throw a tantrum. 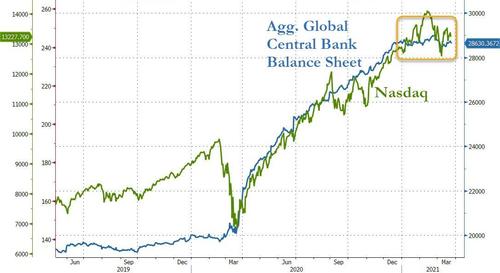 Get back to work Mr.Powell. The market will never be satiated as former Dallas Fed president Richard Fisher’s previously warned:

“[The Fed] cannot live in fear that gee whiz the market is going to be unhappy that we are not giving them more monetary cocaine.“

“Does The Fed really want to have a put every time the market gets nervous? …Coming off all-time highs, does it make sense for The Fed to bail the markets out every single time… creating a trap?”

“The question is – do you want to feed that hunger? Keep applying that opioid of cheap and abundant money?”

“…but we have to consider, through a statement rather than an action, that we must wean the market off its dependency on a Fed put.”

Those words were spoken almost exactly a year ago!

The Disaster of Bretton Woods vs. a Real Gold Standard