Coming on Trump’s last full day in office, the US has slapped yet more sanctions on the Nord Stream 2 Russia to Germany natural gas pipeline as part of ongoing efforts to prevent its completion, specifically targeting a ship in involved in its final leg of construction.

The Russian pipe-laying ship “Fortuna” and its owner will be subject to new sanctions according to a declaration by the US Treasury on Tuesday, specifically under the Countering America’s Adversaries Through Sanctions Act (CAATSA). Additionally the oil tanker Maksim Gorky and two Russian firms, KVT-Rus and Rustanker, were blacklisted. 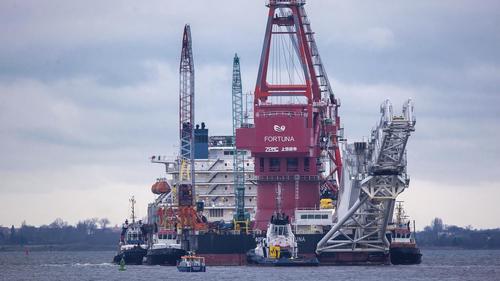 “The United States is not afraid to hold accountable those who continue to aid and abet this tool of Russian coercion,” Secretary of State Mike Pompeo said of the new measures in his last statements while on the job in the Trump administration.

The new measures come as Gazprom has estimated that only 6% of the pipeline remains till completion. This is equal to about 150kim, which Russia has vowed to see through to finish.

While prior US sanctions have been shrugged off, though sometimes with temporary stoppages, Gazprom and Russian officials are now sounding the alarm over the growing “risk” the project could be suspended altogether if more Washington sanctions are piled on:

Russian state gas company Gazprom acknowledged there is a risk that its undersea pipeline to Germany could be suspended or cancelled after the United States on Tuesday slapped sanctions on a Russian ship involved in its construction.

Germany’s Economy Ministry said it had been informed in advance of the new US sanctions against the Russian pipe-laying ship Fortuna and its owner. “We take note of this announcement with regret,” the ministry said.

The Nord Stream 2 pipeline would increase Europe’s dependence on Russian gas and Russia’s leverage over Central Europe. Today, @StateDept imposed sanctions on KVT-RUS for providing a vessel engaged in pipe-laying & identified the vessel as blocked property.https://t.co/OUYG2KqSK7

While underscoring the state-owned company plans to finish, a fresh memorandum by Gazprom issued to investors noted that these latest sanctions could make “the implementation of the project impossible or unfeasible and lead to its suspension or cancellation,” according to TASS.

Kremlin spokesman Dmitry Peskov separately on Tuesday slammed the “crude and illegitimate US pressure” in the form of 11th hour Trump administration sanctons.

“We closely follow the situation and analyze it as we continue work to finalize the project,” Peskov told reporters.