A senior official from Nord Stream 2 AG, the project company leading the Nord Stream 2 Russia to Germany natural gas pipeline project, has reported an uptick in “provocative” activity from warships and planes in the area where the pipeline is being built.

“Higher activity of naval vessels, airplanes and helicopters and civilian vessels of foreign states is observed in the work area after restarted construction of the offshore segment of the Nord Stream 2 gas pipeline, whose actions are often clearly provocative,” said Nord Stream AG official Andrei Minin, according to the Russian news agency TASS. 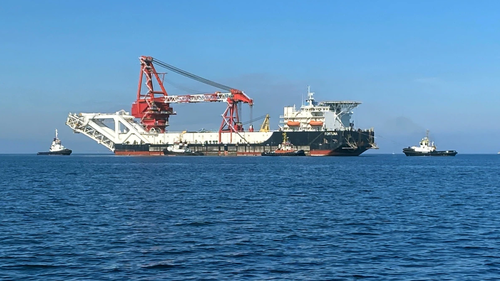 Above: the pipe-laying vessel Fortuna, which is operated by the Russian company KVT-RUS and recently targeted by US sanctions. Image via Reuters

Minin said a 1.5-mile safety zone is established around the construction area where vessels are not supposed to enter. “Nevertheless, naval vessels of foreign countries are constantly registered near service ships performing work,” he said.

He added that a Polish antisubmarine warfare airplane is “regularly flying around the work area at a small height and closely to the pipelay vessel.”

Minin said in one provocation, an unidentified submarine was above surface within one mile of the pipeclay vessel Fortuna, a ship that was hit with US sanctions on January 19th. Minin said the activity indicates “obviously planned and prepared provocations.” Besides warships and planes, he said fishing vessels have also come dangerously close to the construction area.

With the Nord Stream 2 gas pipeline nearing completion, despite US sanctions, its operator has warned that NATO warships & submarines have been entering its construction zone in ‘planned & prepared provocations’ to obstruct work.https://t.co/mPXQgNgaszpic.twitter.com/upRVLOibFL

The Nord Stream 2 pipeline has been in the crosshairs of the US for years, but despite sanctions and threats, Nord Stream AG reported on Thursday that the project is now 95 percent complete. Construction restarted in December 2020 after being suspended due to threats of US sanctions.

Although it’s not clear if the US is involved in these provocations, it is likely. Washington seems willing to take extreme measures to stop the project and is threatening to sanction its ally Germany. Besides the US, another country keen to stop the project is Ukraine, which stands to lose up to $3 billion a year in gas transportation fees if the pipeline is complete.

The original Nord Stream consists of two lines that run from Vyborg, Russia, to Lubmin, Germany, near Greifswald. The new project would add two more lines, doubling the amount of natural gas Russia could export to Germany.

Denmark Cracks Down On Mass Migration