Not The Onion – Gender-Neutral Playing Cards?

Authored by Ned Barnett via AmericanThinker.com,

The media has been buzzing with this news about the young forensic psychologist from Oegstgeest, Netherlands and her amazing creation.  A quick Google review of this story found more than 100 news stories about this innovation – not just (or even primarily) in fringe online media outlets – but in mainstream media from the Reuters to the New York Post.

“If we have this hierarchy that the king is worth more than the queen,” Ms. Mellink said in a press interview, “then this subtle inequality influences people in their daily life (sic) because it’s just another way of saying ‘hey, you’re less important.’  Even subtle inequalities like this do play a big role.” 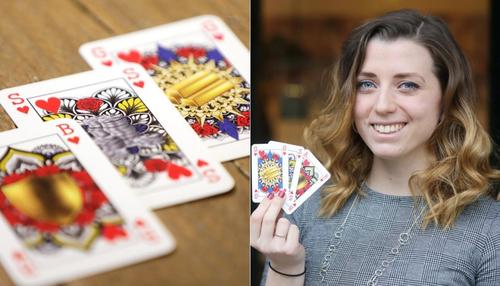 Despite their hearts being in the right place on the left side of their chests, both Ms. Mellink and the fawning media who’ve been both reporters and cheerleaders for this long-overdue innovation have managed to miss the main point.

Playing cards – and indeed most, if not all – games, are politically incorrect, and for a variety of reasons.

Consider, for instance, a deck of cards – even Ms. Mellink’s gender-neutral deck of cards.  They have four suits – Hearts, Diamonds, Clubs and Spades – as well as two colors – Red and Black.  “Red,” obviously, is a not-so-subtle allusion calling to mind the Red States, where – in the most recent two Presidential elections – white supremacists voted overwhelmingly for Trump.  “Black,” especially when connected to the name of one of the four suits in the card deck, is an obvious and historically-offensive racist reference to a pejorative label for black men.  This clearly racist sub-text is also present in the game of checkers, where Red and Black compete for power and dominance.

Another major offender is the board game Scrabble. The fact that the game’s rules contain no restriction on the use of specific words ignores the risk of allowing players to use excluding terms. It is well within the rules to marginalize individuals or groups, and insult groups of disadvantaged or discriminated-against people.   Verbal micro-aggressions, such as the use of demeaning gender-specific pronouns, are freely permitted in the game.  Specifically, trigger words, hate speech and the cultural appropriation of words – all of which must be avoided at all cost – are freely permitted in Scrabble.  The game does nothing to prevent their use, nor does it encourage virtue signaling by players offended by their opponents’ use of hurtful and exclusionary words.  That signaling should be rewarded as a necessary part of the process of excluding hateful, hurtful words from the game.

Monopoly – in some ways the worst offender – is symbolized by a cartoon caricature of a white male capitalist, an oligarch and almost certainly a Republican … a Trump Republican.  This raises some important questions, including, “Is Donald Trump consciously channeling the Monopoly icon, or is this merely a coincidence of cosmic proportions?”  Other questions include: “How does this paternalistic affirmation of the patriarchy makes right-thinking people feel while playing such a game?”  Or, “What does Monopoly’s embrace of rapacious exploitation of workers and tenants teach our children about life in a society dominated by unfettered capitalism?  Shades of Gordon Gekko …

However, perhaps the most offensive game – as well as perhaps the oldest board game in human history, is chess. This game is also the most blatantly offensive of the lot.  The reason is obvious to even the color-specific visually-impaired around us.  Chess pieces are either white or black, and white ALWAYS goes first, while black ALWAYS goes second.  The racist message of chess is hardly obscure or subtle.  Players are told that white is always better than black.

So, while Ms. Mellink has identified the risk of politically-incorrect games and gaming devices, she has barely scratched the surface.  If we want a “safe space” for games and gaming, we must take collective action to enforce decent, inoffensive standards on those games.