In the ultimate irony to kick off the chaos that is 2021 – or as some are already calling this new year, “2020 on steroids” – the government of Venezuela is urging for calm and “stability” in the United States.

There’s little doubt that Maduro and his Foreign Minister Jorge Arreaza were giddy with excitement as the latter crafted a formal message to US leaders which “condemns the political polarization” in the USA.

From Caracas to Washington:

Venezuela expresses its concern over the acts of violence that are taking place in the city of Washington, USA; it condemns the political polarisation and hopes that people in the USA can open a new path toward stability and social justice. https://t.co/d9EQFC2Sb4

The message, also posted to the Venezuelan FM’s verified Twitter account, calls out the “acts of violence” currently rocking the capitol in DC and expressed “concern”.

According to a partial rough translation, the communication says:

“Venezuela expresses its concern over the acts of violence that are taking place in the city of Washington, USA; it condemns the political polarization and hopes that the US people can open a new path towards stability and social justice.

Venezuela condemns the political polarization and the spiral of violence that only reflects the profound crisis that the political and social system of the United States is currently experiencing.”

The letter further calls out American hypocrisy in language that contains a bit of gloating over the apparent political instability in the US, even as the Trump administration has for years been lecturing Venezuela over its own internal strife. 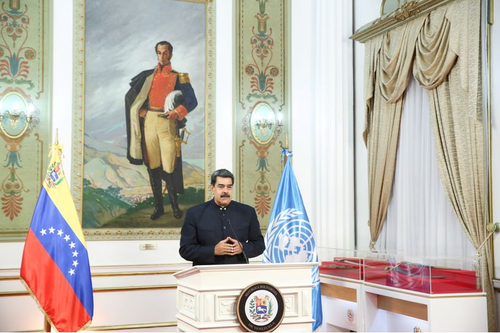 It emphasizes that “with this unfortunate episode, the United States suffers the same thing that they have generated in other countries with their aggressive policies.”

“Venezuela hopes that the acts of violence will soon cease and the American people will finally be able to open a new path towards stability and social justice,” the message adds.

So this is where we are: socialist Venezuela which in the last two years has been hit with multiple failed coup attempts against the Nicolás Maduro regime is now gleefully lecturing the United States on bringing “stability” to its own serious domestic unrest.