A global economic recovery is coming in hotter and faster than previously anticipated by the OECD as President Biden’s $1.9 trillion stimulus program will boost not just the domestic economy but the world.

The Paris-based organization upgraded its outlook for global growth on Tuesday in a note titled “The need for speed: faster vaccine rollout critical to stronger recovery,” where it explains global output could surge above pre-pandemic levels by the second half of 2021 as vaccine rollouts and stimulus aid the recovery but warned of unevenness. In Europe, measures to boost output will result in slower growth, with the OECD lowering France and Italy’s outlook this year. It also warned accommodative policies should not be prematurely tightened. 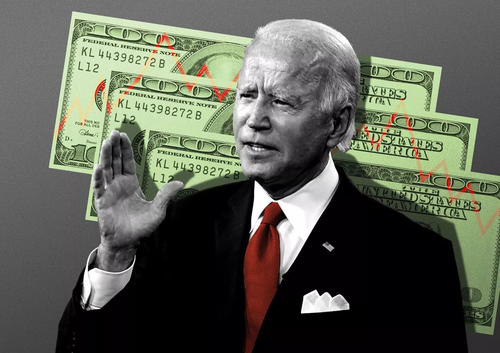 OECD estimates global GDP growth will print around 5.6% this year, an upward revision of more than one percentage point since its December 2020 report.

Laurence Boone, the OECD’s chief economist, told the Financial Times that the stimulus bill – known as the American Rescue Plan – will add one percentage point to global economic growth in 2021.

There are consequences to governments and monetary authorities across the planet printing like there was no tomorrow – that is – a sharp rise in inflation expectations are putting pressure on central banks to adopt some form of the yield curve control to cap the long end of the curve. It has also added to a violent shift from growth to value, where the once favored tech stocks have lost their luster, such as TSLA, NFLX, and AMZN, as investors pivot to value companies like XOM.

Boone doesn’t believe the stimulus package will increase domestic inflation to dangerous levels because “there is a lot of slack in US labor markets,” she said.

The upbeat US outlook, only made possible by endless money printing, has side effects. Morgan Stanley’s Mike Wilson pointed out another round of stimulus ontop of vaccine rollouts and reopening increase inflation expectations and “put pressure on valuations, especially for the most expensive stocks that had reached nosebleed valuations.”

Wilson said, “most portfolios are positioned” and “overexposed to growth stocks and either short or underweight the value areas.” With Biden’s monstrous fiscal stimulus, the new value regime in town will generate a “portfolio disruption” causing a “net negative effect on the major averages, led by the Nasdaq.” 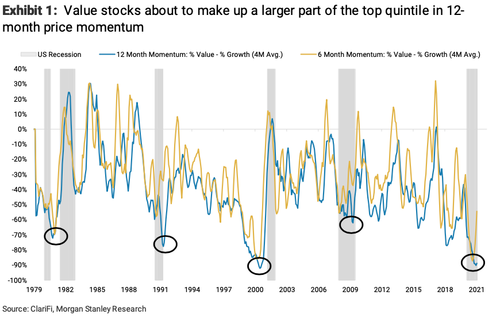 He notes, “Markets lead the Fed, not the other way around, and we are now at that moment of recognition,” adding that, “the bull market continues to be under the hood, with value and cyclicals leading the way. Growth stocks can rejoin the party once the valuation correction and repositioning is finished.”

So in an era where MMT, or Magic Money Theory, is being unleashed by the governments and central banks to supercharge the domestic and global economy, perhaps the lesson to be learned is to stay away from the sinking ARKK.