Oil Inventories Soar Most Ever; Gasoline Stocks Drained Most Since 1990

Oil prices surged back higher overnight after a brief dip on the API-reported surprise crude build (and massive product draws), as hopes that OPEC+ won’t hike output too much prevail. The widespread view among the Organization of Petroleum Exporting Countries and its allies is that the oil market can absorb extra barrels, according to people familiar with the matter.

“The question is not ‘if’ but rather ‘by how much’ the petro-nations will ease supply curbs,” said Norbert Ruecker, an analyst at Julius Baer Group Ltd.

“The economic recovery and the likely leisure and travel activity bounce will fuel oil demand and extra supplies will be needed to avoid an over-tightening.”

As we saw with API data, the Texas turmoil will make this inventory/production/demand data very noisy.

After API’s data (massive build in crude, massive draws in products), DOE’s official data was stunning to behold with a record build in crude and record draw in gasoline stocks… 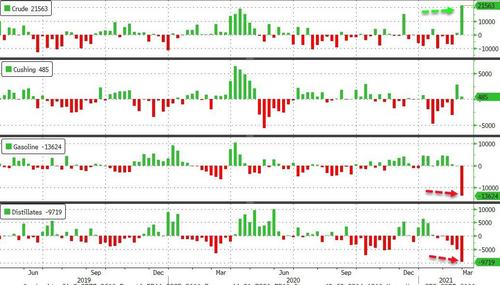 After tumbling in the prior week, Gasoline demand rebounded last week, but remains well below pre-COVID levels… 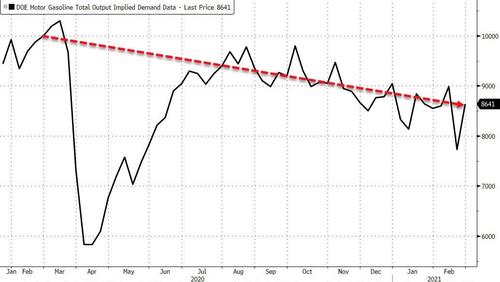 After plunging the prior week due to the storm in Texas (tied with the record drop in August during the hurricane season), US crude production returned very modestly last week… 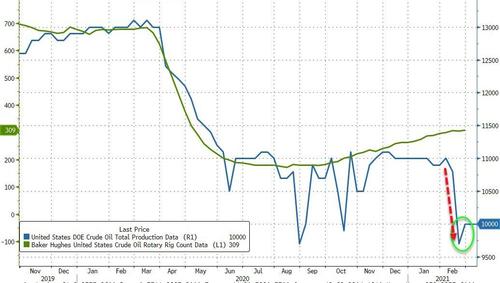 At least 15 refineries, accounting for a combined 4.2 million barrels per day of capacity, were still experiencing ongoing outages last week. 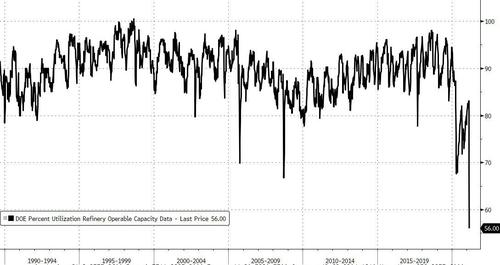 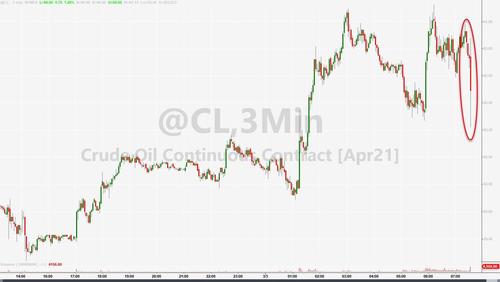 But the algos were quick to return and push it higher… 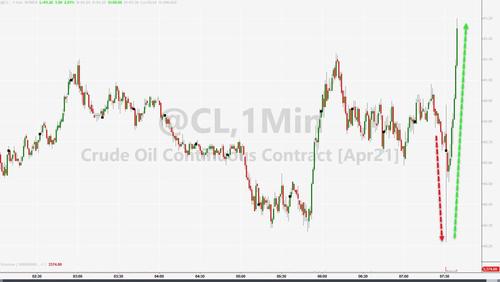 Finally, all eyes will now rotate (virtually) to the cartel, and as Bloomberg notes, there are two parts to the potential production ramp-up that OPEC+ will discuss.

The gathering pace of recovery presents “the perfect opportunity for OPEC+ to raise production,” Australia & New Zealand Banking Group Ltd. said in a note, predicting that the group will agree to add 750,000 barrels a day.

We also note the timing of OPEC+’s potential move to slow the rise comes as US gas prices (at the pump) head up towards $3.00…

“Gas prices are coming into the month of March like a lion.. and might end up leaving the same way,” GasBuddy’s oil and refined products analyst Patrick de Haan says.

If OPEC+ decides this week to put more oil back to the market, it could cool off the rally in crude prices and, consequently, the continued rise in U.S. gasoline prices with the summer driving season approaching, Matt Egan at CNN Business argues.

Gold Vs Bitcoin Part 2: Careful What You Wish For