Oil prices continued their recent surge, with WTI topping $61 a barrel for the first time in a year, as a deep freeze in Texas exacerbated a power crisis taking out a third of U.S. crude production. 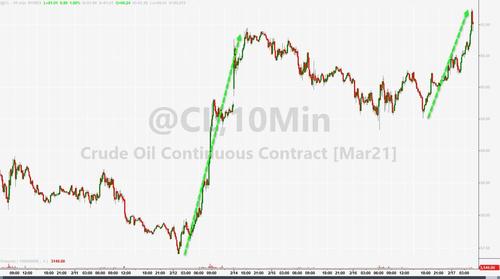 Bloomberg reports that some 3.5 million barrels a day of American output has been halted, according to traders and industry executives, as a cold blast freezes well operations and cuts power across the central U.S. That’s being offset, however, by the suspension of more than 3 million barrels a day of refining capacity, according to Energy Aspects Ltd.

“The production loss is significant and could last for several days if not weeks,” said Stephen Brennock, an analyst at PVM Oil Associates Ltd.

Interestingly, the loss of demand from the refineries has also pushed West Texas Intermediate futures’ prompt timespread into a bearish contango structure for the first time in about a month.

Temperatures in Texas are now low enough to freeze oil and gas liquids at the well head and in pipelines laid on the ground. They’re put under the surface in colder regions.

Before the crisis, the U.S. was pumping about 11 million barrels a day, according to government data. Production in the Permian Basin alone – America’s biggest oil field – has plummeted by as much as 65%.

Additionally, as OilPrice.com’s Irina Slav details, the Texas winter storm has highlighted the importance of fossil fuels at a time when the politically correct message that we need to electrify everything that currently uses fossil fuels to generate energy has become the dominant message of the energy transition. Solar, wind, and energy storage – perhaps with the help of hydropower and some nuclear – can handle the energy needs of mankind, the argument goes, and do it with a much lower carbon footprint.

Yet, the Arctic cold wave that is sweeping across the United States has seriously undermined this argument.

Natural gas prices exploded last week in many parts of the U.S. and are still rising higher, as are electricity prices. In Texas, a state unaccustomed to such weather, wholesale electricity prices hit $9,000 per MWh on the spot market, prompting at least one retail power supplier to urge its clients to switch to another provider to avoid huge utility bills. 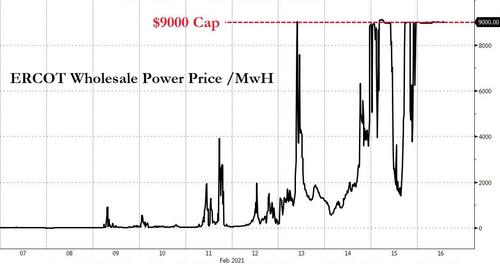 Blackouts are now a fact, with over three million households across Texas without power at the time of writing. Authorities, meanwhile, are urging people to conserve energy by limiting their consumption.

Texas, the Wind Capital of the U.S.

Texas is the biggest producer of wind energy in the United States.

Unfortunately, the state saw half of its wind turbines frozen by the icy winds blowing from Canada to parts of the U.S. that were unaccustomed to such temperatures. Of a total 25 GW in wind power capacity, 12 GW were knocked out by the freezing spell. At the same time, there is a shortage of natural gas, likely because of the sudden spike in demand. And it could get worse.

The cold spell has hit the oil and gas industry in Texas as well. Oil wells are being shuttered, and refineries are being shut down amid the blackouts caused by the deep freeze and a shortage of gas. Pipeline operations have also been affected by the blackouts, which could compromise gas supply further.

“Attempting to electrify everything would concentrate our energy risks on an electricity grid that is already breaking under the surge in demand caused by the crazy cold weather,” wrote veteran energy journalist Robert Bryce in an article for Forbes this week. The current weather situation, Bryce said, shows very well why it would be highly risky to put all our eggs, as it were, in the electricity basket. If we electrified everything, he argued, it will only a matter of time before a much more serious blackout hits.

Indeed, a blackout of massive proportions almost hit Europe earlier this year. The fact that the catastrophe was avoided was lucky, but the event highlighted two problems: over-reliance on intermittent solar and wind power, and a possibly excessive interconnectedness of the continent’s national grids.

Speaking of Europe, its solar power production has dropped to zero these days. No country except Slovenia is producing solar power right now, and Slovenia’s production is a meager less than 1 percent of its total generation. Wind power is going strong in most of Europe, but solar is out.

In Sweden, even wind power production is low because wind activity is low. So Sweden, which has ambitions to become all-renewable by 2040, is seeing a jump in electricity prices to the highest since 2011 and is urging people to conserve energy by reducing their consumption. Incidentally, it is also importing electricity from countries such as Poland and Lithuania, which generate it from coal, compromising Sweden’s green commitment.

This is telling us—in no uncertain terms—that the lack of diversification is the opposite of wise. It is as true of electricity supply as it is of economies and businesses. Total electrification and the shutting out of fossil fuels completely will mean blackouts. It’s as simple as that.

Because while the energy generated by the Sun and the wind comes free, it cannot be summoned when you need it, and even combined with energy storage, it will be insufficient. That’s what fossil fuels are for.

Incidentally, a report from last year forecast that the Earth was entering a cooling period because of a phenomenon called a Grand Solar Minimum that could last until 2053 and lead to a “noticeable reduction of terrestrial temperature.”

The Delta Variant, the unvaccinated, the two Americas, and other propaganda fabrications