WTI tested up near $50 overnight before plunging back below $47.50 on the Russia headlines… 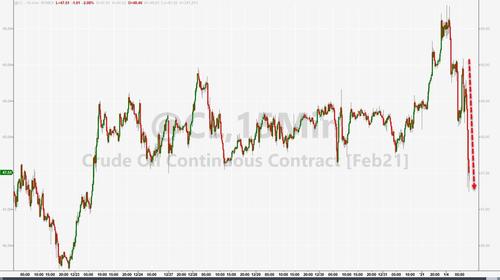 Bloomberg reports that the opening remarks from Prince Abdulaziz Bin Salman suggest very strongly that Saudi Arabia will oppose any increase in production in February. That could make for another very fraught meeting, if Alexander Novak decides to dig his heels in over the Russian proposal for an increase.

However, as OilPrice’s Irina Slav notes, OPEC has signaled it is concerned about oil demand despite its production control efforts as Covid-19 cases continue to surge in key markets, and the global total is still on the rise.

It seems vaccine optimism has begun to wear off, too, as it has become clear mass vaccinations will take months rather than weeks, so demand will be subdued for longer than some optimists in the trading community may have hoped.

“The outlook for the first half of 2021 is very mixed,” OPEC Secretary-General Mohammad Barkindo said on Sunday, ahead of an OPEC+ meeting later today. “There are still many downside risks to juggle,” Bloomberg quoted the official as saying.

In December, the extended cartel agreed to Russia’s proposal to start adding 500,000 bpd to their daily total from January based on the improved demand outlook and some members’ unwillingness to continue cutting deep. Yet this may change at today’s meeting. Russian Deputy Prime Minister and OPEC coordinator Alexander Novak suggested at the end of last year that the new deal could be tweaked if demand were to recover faster than previously expected.

While this looks unlikely at the moment, prices have improved, which would lend weight to Russia’s support for another 500,000 bpd increase in production in February. It was in its original proposal, which covered the period from January to April, but OPEC+ also agreed in December to meet every month to keep its hand on the pulse of the oil market, which basically means surprises are always possible whatever the original plans were.

According to the Bloomberg report from the preliminary meeting of OPEC yesterday, oil consumption was about to “shift from reverse to forward gear,” soon, thanks to vaccines, Barkindo said.