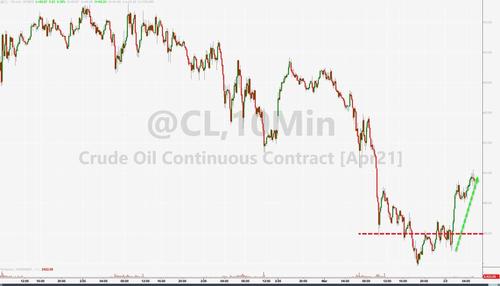 The total crude oil production from all 13 OPEC members stood at 24.89 million bpd last month, with Saudi Arabia achieving around 850,000 bpd of its pledged 1-million-bpd cut beyond its OPEC+ quota, according to the Reuters survey of OPEC sources, sources at oil firms, and tanker-tracking data.

In January 2021, according to OPEC’s secondary sources, the cartel’s oil production averaged 25.50 million bpd, up by 180,000 bpd from December, with output rising in top producer Saudi Arabia, as well as in Venezuela and Iran, which are exempt from the OPEC+ cuts.

In February, however, the first of two months in which Saudi Arabia is cutting an additional 1 million bpd, total production declined thanks to this cut, and to lower exports from Angola and Libya, the Reuters survey found. Iran, which like Libya is exempt from the cuts, saw its supply also drop in February.

In Libya, oil loadings at export terminals were disrupted last month, after members of the Petroleum Facilities Guard stopped vessels from loading crude amid a strike over delayed salary payments.

Nigeria, Africa’s top oil producer and an OPEC member that has struggled with compliance with the cuts, saw its production rise by 100,000 bpd after

ExxonMobil lifted a more than a month-long force majeure on the Qua Iboe crude oil export terminal at the end of January.

OPEC and its non-OPEC allies led by Russia are meeting later this week to decide how to proceed with the collective production cuts from April onwards. Given the recent rally in oil prices, analysts expect the group to lift production in some form and the Saudis to reverse their unilateral 1-million-bpd cut.

As Newsquawk noptes, it is expected that some of the more hawkish producers, namely Russia, will exert pressure on the group to ease its output curbs, with recent commentary from Russia Deputy PM Novak suggesting that the market is balanced. Sources last week said members will mull raising output by as much as 500k BPD, effective April. Saudi Arabia will have to avoid a rift widening as the Kingdom itself is to unwind its volunatry additional supply curbs of 1mln BPD of oil, which it implemented over February and March as a goodwill gesture against the backdrop of lockdown re-impositions. As unanimity is needed for any accord, the Saudis may as a precautionary measure opt to either take a more gradual approach in the 1mln BPD reintroduction, or delay it until until some of the near-term fragilities within the oil complex have passed.

The February JMMC offered no surprises given that the February and March production quotas were set in January. To recap that more pertinent meeting, Russia and Kazakhstan were permitted to raise output by a modest 75k BPD (65k BPD for Russia), which some suggested was a small technical adjustment rather than a signal of any rift/divergence within the group. Saudi, meanwhile, surprised markets with a unilateral 1mln BPD cut through February and March at a time when COVID variants seemed a greater threat.

Brokerage PVM highlights that a number of questions remain unanswered about OPEC policy, and this makes it difficult to predict the outcome of the meetings; however, it agrees that the show of unity between Saudi and Russia will likely be the most important factor. Saudi Arabia has previously warned against complacency, but Russia sees the continued rebalancing of oil markets as a signal to roll-back output constraints. Recent reports also highlighted diverging views among members against the backdrop of higher prices; a few have voiced support for higher production, whilst some proposed no more relaxations until June. Further, news reports citing advisers have stated that OPEC is likely to maintain production curbs in April, and the Saudis are planning to bring back its voluntary cuts, albeit plans can change.

PRICES: On the demand-side, the ramp-up in vaccinations across major economies alongside the barrage of fiscal and monetary stimulus have provided oil prices with underlying support. Meanwhile, the supply-side sees an extra 1mln BPD of Saudi oil out of the market, while a chunk of US operations were temporarily taken offline by the deep freeze in Texas. The terms structure has also seen steeping backwardation – making oil more attractive for investors via roll yields. Brent prices are almost back to pre-pandemic highs of ~USD 71/bbl, with Brent recently hitting levels just shy of USD 68/bbl. One OPEC source suggested prices are “definitely high” and more oil is needed to cool the markets – adding that a 500k BPD increase looks to be a good option.

DEMAND: The latest OPEC Oil Market Report downgraded its 2021 world oil demand growth forecast by 100k BPD from prior report, with demand now set to rise by around 5.80mln BPD Y/Y. OPEC noted that lockdowns contributed to the downward revisions in H1 projections and the revisions are concentrated in the OECD region. That being said, healthy demand is expected in H2 2021. “The momentum is then expected to be supported by pent-up demand, especially in the contact-intensive services sectors like tourism and travel, leisure and hospitality. The seasonal aspect of warm weather in the Northern Hemisphere and the summer travel season will add more support… further upside to the current global economic growth forecast may materialise.”, OPEC said. Resilient variants and further lockdowns of course remain a tail risk for demand – but ministers are likely to emphasise proactiveness and flexibility to soothe these fears.

COMPLIANCE: Compliance has remained an issue among members – with Russia also among the recent straddlers. However, OPEC+ compliance in January stood at 103%, above December’s 101%, according to three sources cited by Argus. These figures will be reviewed by the JMMC and details are likely to be released by journalists. Eyes are also on Iraq as the country boosted its exports by 4.4% in the first two weeks of February, according reports citing Bloomberg data. The report suggests that if Iraq keeps up this pace of export growth, also considering domestic, it could top the production ceiling of 3.6mln BPD.

IRANIAN/LIBYAN SUPPLY: Libya and Iran are currently exempt from the production quotas, due to volatile domestic supply for the former and US sanctions for the latter. These are unlikely to take much credence at this month’s decision. Libya’s situation remains uncertain as oil loadings at a Libyan export terminal were again recently disrupted as production was restored to its pre-blockade level of 1.25mln BPD. Meanwhile, the US has signalled that it will not remove Iranian sanctions to bring Tehran to the negotiating table over the nuclear deal, but an interim deal was touted in order to restore and build confidence. That being said, tensions remain heated as President Biden warned Iran that the recent US airstrike against Iranian-backed militias shows that Iran can expect consequences.

US SHALE THREAT: The loss of market share to the US has been an ongoing concern among OPEC+ members, with some also highlighting the resiliency of the US energy industry in the face of the Texas freeze. However, Pioneer Natural Resources suggested OPEC+ no longer needs to worry about this loss of market share due to strong demand for crude, alongside low growth rates from Shale.

Morgan Stanley sees Brent rising to USD 70/bbl in Q3 amid improving demand. The bank argues that “new COVID-19 cases are falling fast globally, mobility statistics are bottoming out and are starting to improve, and in nonOECD countries, refineries are already running as hard as before COVID-19.”