While the US cash market may be closed for holiday tomorrow, world traders aren’t wasting any time and are taking reflationary traders to the next level, starting with Brent which just rose 2% to $63.47, the highest level since January 2020. 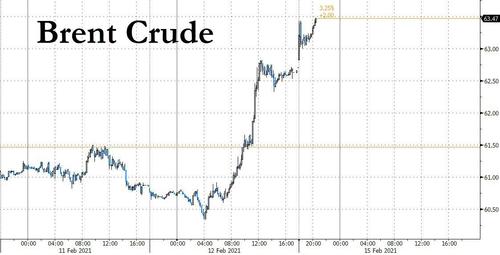 There are many catalyst for the surge:

Among all these bullish indicators, there is just one potential downside risk: whereas OPEC has been remarkable resilient in keeping production quotas in place so far, Reuters’ John Kemp writes that “oil prices have reached a critical threshold where OPEC+ must decide whether to increase production, or risk losing market share again to U.S. shale producers.”

As he further notes, after adjusting for inflation, Brent prices are now in the 58th percentile for all months since the start of 1990, which is consistent with slow but steady increases in output by non-OPEC producers.

In the last decade, whenever Brent prices averaged more than about $57 per barrel, U.S. producers captured all the growth in global oil consumption, increasing their market share at the expense of OPEC and its allies.

Responding to the earlier rise in prices, U.S. producers have already increased the number of rigs drilling for oil to nearly 300, up from a low of just 172 in August, according to oilfield services company Baker Hughes.

More recent price increases are likely to ensure the number of active rigs increases at least until the end of June, when the count is likely to exceed 425 or even 450, if the current trend continues.

Reflecting the rising rig count, U.S. production from the Lower 48 states excluding the Gulf of Mexico is already forecast to rise from current levels by 340,000 barrels per day (bpd) by the end of 2021.

In short, if prices rise further, both drilling and production are likely to accelerate even faster in the second half of 2021 and 2022.

On the other hand, traders don’t appear especially bothered and in the oil futures market, the price for Brent delivered in April is trading more than $2.70 per barrel higher than for deliveries in November, a price structure known as backwardation. 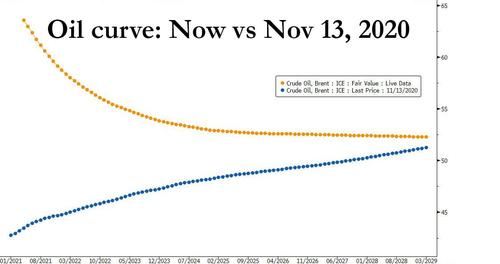 Backwardation normally occurs when traders anticipate production will fall short of consumption and petroleum inventories are low and falling further. 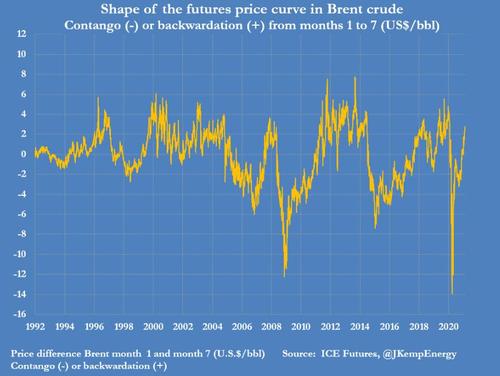 As Kemp concludes, “If that expectation proves correct, Brent prices are likely to increase further, perhaps significantly. Escalating prices and intensifying backwardation are both signalling the need for more production in the rest of the year.”

Cumulatively, the Covid-19 recession has cost US households US$400 billion in income, but they have already received more than US$1 trillion in transfers (even before the late December and forthcoming rounds of stimulus). Households have already accumulated US$1.5 trillion in excess saving, which is set to rise to US$2 trillion (9.5% of GDP) by early March once the additional fiscal package is enacted.

… it is unlikely that the upward trajectory of oil, commodities, and the reflation trade in general will change any time soon.

Why The UK Government Now Must, But Won’t, Abandon Lockdown

Stocks Slammed At Cash Open As Quad-Witch Weighs On Sentiment