One of the most anticipated and material changes to the S&P500 is set to take place in just hours, when Tesla – a $615 billion company that has barely generated any GAAP profits in its operating history – is set to join the world’s most important market index.

What happens then? Well, as with every other thing in the market, there are two schools of thought.

According to one, which Bloomberg affectionately calls the Wall Street smart beta data nerds – Tesla will be a drag on the index. These “smart beta” quants believe that market-weighted indexes suffer by chaining their fortunes to big and bloated companies. As such, Tesla’s imminent entry into the S&P 500 is stirring their passions by framing the debate in particularly stark terms. According to Bloomberg, index pioneers such as Rob Arnott are making the rounds and publishing studies in the run-up, “trumpeting data that purports to show that megacap companies have the potential to harm passive returns.” Their pessimistic view coincides with that of the smart-beta folks who say many stock indexes stumble when the massive companies that dominate them run out of room to grow.

In a recent paper titled “Tesla – The Largest-Cap Stock Ever to Enter S&P 500: A Buy Signal or a Bubble?”, Arnott and a colleague at Research Affiliates looked at 31 years of data and found that when a company is big enough to enter the index as one of its 100 largest members, it falls 7% over the following year, on average. Meanwhile, the average deleted company beats the gauge by 20% after being kicked out (in this case, Tesla is replacing Apartment Investment and Management which is down 46% YTD).

According to Arnott, the data is evidence that benchmark overseers such as S&P Dow Jones Indices “buy high and sell low,” resulting in a performance gap of 24% between megacap entrants and discretionary deletions over the next 12 months That ends up costing investors money, and exposes what quants such as Arnott consider a fundamental flaw of market-cap indexes – “too much dependence on companies whose best days may be behind them.”

To Arnott, Tesla’s addition is a case in point of indexes chasing performance: “This Tesla addition is a beautiful illustration of that,” Arnott told Bloomberg in a phone interview. “It’s run up 800% from the March lows. Now you want to add it?” Ironically, the stock surged by about 50% precisely on the news of the S&P addition, begging the question if there is any good news left. 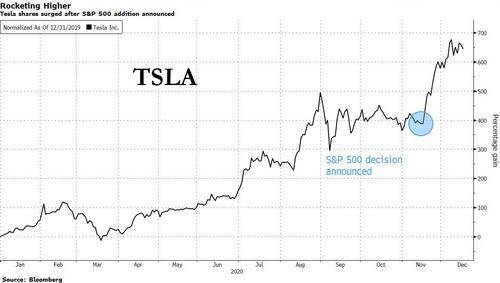 A similar skeptical of S&P’s handling of Tesla was voiced by Vincent Deluard who in a note titled “Time to Fire the S&P 500 Index Committee,” the StoneX strategist wrote that waiting around to add Tesla cost index investors more than $500 billion and “transferred retirement savings to speculators.”

To be sure, the overriding concern among quants and most fundamental traders, is the gaping valuation mismatch between Tesla – currently trading at 20 times sales or almost 10 times the S&P 500’s valuation – and the rest of the S&P.

An attempt to ease investor concerns with a far more sanguine take was published overnight by Goldman’s chief equity strategist, David Kostin, who wrote that “when Tesla joins the S&P 500 next week it will lift the index P/E ratio by just 0.4 multiple turns, much less than most investors expect.” According to Kostin, Tesla currently trades at (only) 170 times consensus 2021 earnings with a $600 billion market cap and $480 billion float cap. 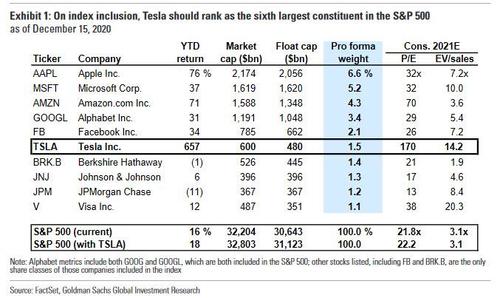 Based on its current capitalization, the company will join the index with a weight of about 1.5%, according to Goldman calculations and given Tesla’s large size and elevated multiple, many investors erroneously intuit that the company’s inclusion into the S&P 500 will lift the index’s current 22x P/E multiple (already close to the highest levels on record) by two multiple turns or more. 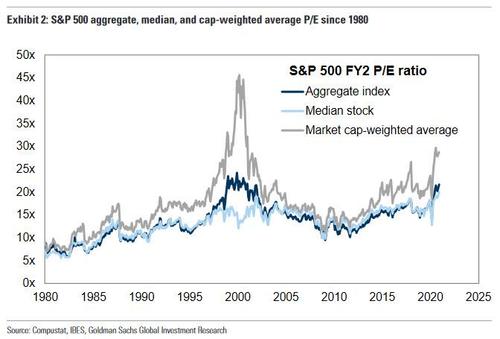 Another way to think about the impact of Tesla on S&P 500 P/E is that the stock will raise the index market cap by roughly 1.5% with only a de minimis contribution to index earnings. As a result, the inclusion will lift the aggregate index P/E multiple by slightly less than 1.5%, or less than half of a P/E multiple turn. This impact would be similar whether the stock traded at a P/E multiple of 170x, 500x, or1000x. As Kostin further explains, the stock’s inclusion should lift the S&P 500 EV/sales ratio by about 1%, from 3.11x to 3.14x.

That said, Tesla’s inclusion will have a larger impact on the S&P 500 market cap-weighted P/E multiple, which will lift the cap-weighted P/E by two turns, from 28.9x to 31.0x. According to Goldman calculations, that post-inclusion multiple will register at the 96th percentile since 1980, compared with a 99th percentile rank for the aggregate P/E. Hardly cheap, despite Kostin’s tremendous efforts to make it seem like a non-issue.

Perhaps realizing that attempts to fundamentally justify the inclusion may be falling short, Kostin then falls back to several iconic inclusions that also appeared rich at the time, and writes that “investors then and now are acutely aware of the “super-cap premium” commanded by select companies. In 2000, CSCO and GE traded at forward P/Es of130x and 40x, respectively. Today, AMZN trades at a forward P/E of 70x and TSLA trades at 170x.” Yes… and what about all those other companies that have been booted from the S&P500 – we are fairly confident that anyone can cherry pick a handful of examples to “justify” their thesis.

In any case, one actually useful observation from Kostin is the calculation of what impact Tesla’s inclusion would have had on S&P performance had it been a member all year. Since TSLA has risen by 657% this year, outperforming the S&P 500 by 640 pp, had it been a constituent all year, it would have lifted the total index return by roughly 200 bp, from 16% to 18%.

Of course, that’s the plan all along – that by adding such hypergrowth companies as Tesla, the S&P will approach Nasdaq-type returns. The only question, of course, is if it’s not too late and – as Arnott warns – the inclusion comes just as Tesla peaks.

Making this particular bearish case comes from twitter user SqueezeMetrics who lays out why the index inclusion may be the worst possible news for Tesla bulls as its “bursts the Tesla” bubble :

Ever since June (at $200/share), Tesla stock has been driven by a perpetual motion machine of hype and call option flows — nothing more. And everyone knows it.

Here’s what not everyone knows:

In other words, since June, $TSLA goes up only when implied volatility (IV) goes up (purple line is IV). 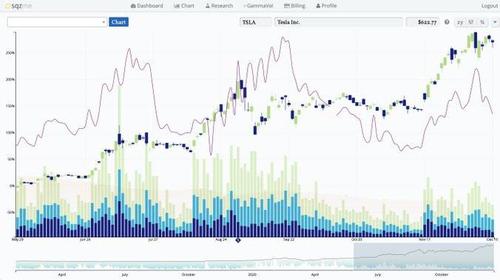 When Tesla joins the index, these historic call option flows and the hype machine behind them will hit the big red fire truck that is the S&P, at 500mph.

Implied volatility will be unable to rise. Call options will bleed value. New flows will be absorbed by real traders.

With the call option hype trade hampered, the stock will have no possibility of further returns — a deliciously ironic end to the ugliest of Robinhood’s many ugly children.

And an appropriately ironic fate for Tesla – a victim of its own “success.”

Too bearish? We give the final word to investing icon Arnott whose assessment is hardly more optimistic:

“When people say, ‘When is the Tesla bubble going to burst?’ I’ve jokingly said on the 22nd of December,” Arnott said. “Nobody knows, but that’s when the index addition argument disappears and that’s when the market starts to search out what the company’s really worth.”

We will know if Arnott is right in just a few days.

Scientists: Vaccination Before Every Vacation May Be Needed