One Bank Throws Up All Over The Surge In COVID Optimism

With every passing day since the Biden inauguration, which also coincides with the day new covid cases in the US peaked… 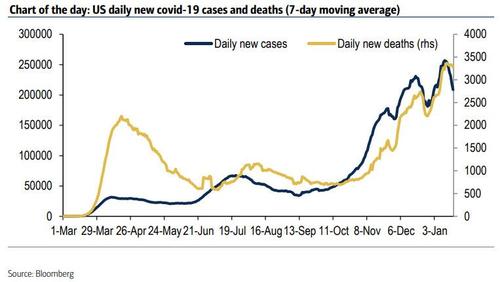 … and hospitalizations plunged by a record amount… 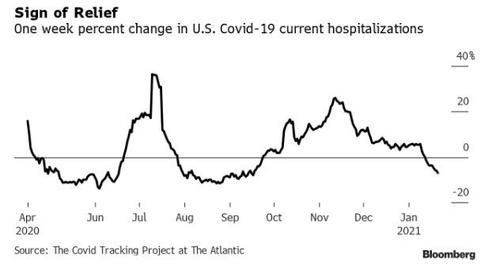 … the covid-related news gets better and better as blue-city after blue-city rushes to reopen after scrambling to enforce full lockdowns into the presidential election.

Furthermore, in the best covid-linked news yet, just a few hours earlier, we learned that covid vaccinations in the US topped the number of cases for the first time… 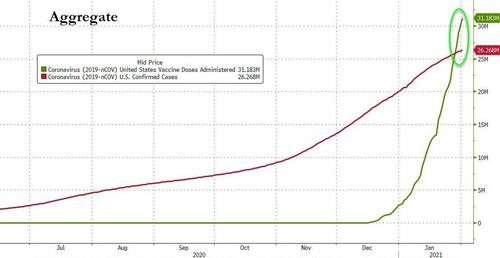 … and with 1.3 million vaccines now being given out daily, one can argue that it’s only a matter of months before herd immunity is reached.

To summarize where we stand, the covid newsflow before and after the Biden inauguration is night and day, with cases and hosptializations tumbling while the daily pace of vaccination has risen from around 200k at end of last year to more than 1 million today. Meanwhile, after a widely-anticipated post-holiday surge, cases have dropped 41% from their peak. Are we out of the woods?

One bank disagrees with this cheerful assessment, and in a note from BofA economist Aditya Bhave, he warns that the worst may be yet to come as he remains “concerned about the new, more contagious virus strains out of the UK, South Africa and Brazil.”

Why? Because according to BofA simulations, even a very optimistic pace of vaccination cannot fully offset their impact the mutations they become dominant. Therefore the bank’s base case is that cases and hospitalizations will actually return to their post-holiday peaks in the early spring (as shown in the chart below).

It could get even worse: in BofA’s pessimistic case, the new strains cause a larger increase in underlying transmission, pushing cases and hospitalizations to unprecedented levels and potentially forcing lockdowns in March-April.

Only BofA’s optimistic case sees no “spring wave” , yet ominously Bhave then says that he views this scenario “as the least likely.”

However, after the spring doldrums, it then starts getting better again and “by the summer, enough people would have been vaccinated to slow even the more contagious virus strains.” This should allow for significant economic reopening.

After the summer, BofA expects another wave in the fall due to colder weather pushing activities indoors and holiday super-spreader events. The size of this wave will be a function of the speed of vaccination. And, as the bank finally concedes, “vaccination slows in our baseline scenario because of hesitancy among the younger population. But if a sufficiently rapid rate of inoculation can be maintained through year-end, we might be able to avoid a fall surge and sustain full economic re-opening.”

Which will be a problem for one simple reason: as we noted earlier, a majority or 51% of Americans, are unlikely to want to get vaccinated, which means that while the rate of vaccinations is currently surging, once the early candidates get vaccinated, the daily pace will fall off a cliff as half the nations refuses the vaccine. What impact that will have on BofA’s pessimistic scenario remains to be seen, although as even the bank admits, in its base case, only about 50% of the population is immune by year-end.

This is most likely insufficient for herd immunity. Some restrictions will likely remain in place through at least next winter, such as capacity constrains at restaurants, sporting events and concerts. Therefore the economic headwind from the virus will linger.

Which, of course, is good news for banks and markets, because it means even more stimulus, and as the bank concludes, “we expect about $1tn of President Biden’s proposed package to get passed. This would take the total fiscal response to the pandemic up to nearly 25% of GDP.” In the end, however, the course of the virus pandemic will shape the contours of the US economy, and according to the BofA economist, “in the first half of the year, we expect growth to be largely supported  by fiscal stimulus. By the summer, however, economic re-opening should release pent-up demand for services. Thus we forecast a peak of 10% growth in 3Q. The impact of stimulus fades in the second half of the year, but so does the virus, allowing the economy starts to stand on its own feet.”

The only question is just how hot will inflation be running at that point, and will the US economy be sliding headfirst into a stagflationary trap, forcing the Fed to take out the Volcker playbook and rapidly hike rates even though doing so would crash the market…

Amazon To Hit Sellers With 5% Fuel and Inflation Fee