Authored by Alex Murashko via The Epoch Times,

Cities throughout Orange County, California, are standing by Sheriff Don Barnes as he fights a court order demanding the release of 1,800 prisoners from county jails. 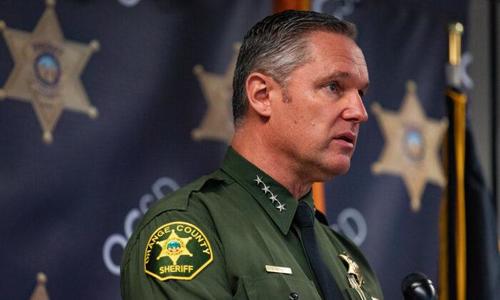 In a Dec 11 court order, Barnes was told to pare down Orange County’s jail population as the centers grapple with rising COVID-19 infections. But the region’s top cop is challenging the order, and refusing to release the inmates.

“Our City Council wholeheartedly supports Sheriff’s Barnes’ appeal to keep these criminals off our streets and his plan to appropriately respond to coronavirus issues in the jail system.”

“The COVID-19 pandemic is serious and presents a risk, but that risk does not outweigh the necessity of holding dangerous offenders in custody,” Barnes said recently. “We cannot start 2021 with a court-ordered crime spree.”

Judge Peter Wilson’s 32-page ruling on Dec. 11 stated that Barnes’ “deliberate indifference to the substantial risk of serious harm from COVID-19 infection to … medically vulnerable people in [his] custody violates their rights under the California Constitution.”

Wilson also stated in the ruling that Barnes’ action and inaction showed “conduct that may unnecessarily expose inmates in his custody to significant risks to their health and safety.”

Opponents to Wilson’s order said the greater safety risk would be to release criminals in jail for crimes such as murder and pedophilia into the general public.

“This is extremely alarming for all of us in any city that we live in,” said Westminster Police Chief Mark Lauderback, who spoke before the council’s vote.

“When you’re being told to release a large number of inmates who should be doing time in serving their sentence, and they are going to be released early, it’s very alarming.”

He called for an effective alternative that would help curb COVID-19 numbers in jail while keeping the public safe.

“Yes, we have a pandemic going on; yes, it is very scary for everybody in the medical field and a society to be living with such a medical nightmare; but doing this without actually taking a look at the consequences of the actions of the judge, I think we need to find a better solution,” Lauderback said.

“If forced to comply with the court order, we are aware you will need to release approximately 1,800 inmates, which both you and the Orange County District Attorney have stated unequivocally poses a significant risk to public safety,” Garden Grove Mayor Steve Jones said in a Dec. 18 letter.

“Specifically, you identified that of the 700 inmates considered medically vulnerable under the Center of Disease Control and Prevention’s Guidelines, 59 inmates are incarcerated for murder, 39 inmates for attempted murder and 90 for child molestation.”

The mayor’s letter said that there have already been significant impacts on public safety related to the release of prisoners by Orange County and the state related to COVID-19. More than 22,000 inmates have been released by the California Department of Corrections and Rehabilitation since the pandemic began.

On Dec. 18, Orange County recorded its first COVID-19-related inmate death when Eddie Lee Anderson, 68, died about a week after testing positive for COVID-19. The Theo Lacy Facility inmate was transferred to a hospital on Dec. 13 for treatment.

According to the Orange County Sheriff’s Department, 1,512 inmates have tested positive for the virus since the beginning of the pandemic. The sheriff’s website indicates that as of Dec. 21 there are currently 835 inmates with the disease.