The U.S. stock and bond markets and its entire financial system now teeter on the edge of collapse if there is even a slight hint that 1) the Fed won’t give more free candy to Wall Street or 2) the Fed has lost control of the Dead Money Economy it has created.

Take a quick glance at these depictions of Dead Money: while the broad measure of the money supply in the U.S., M2, has gone up 12-fold since the start of 1981, the velocity of money–how many times it changes hands over a period of time–has collapsed.

What does this tell us about the U.S. economy and what lies ahead? The Federal Reserve’s FRED database provides a definition of M2 that’s a good starting place.

Note that the Fed refers to money stock, where the word stock refers to the sum total of money in the system, as in “the store is fully stocked with merchandise”. They’re not referring to the stock market, but to all the money that’s in the “store” of our financial system: cash, money in checking accounts and money market funds, etc. Here’s the definition of M2:

Put somewhat more directly, M2 is all the money in the financial system which people can spend. It doesn’t include the money in individual retirement accounts because that has been set aside for the long-term and is not available (except in cases of early withdrawal) to spend.

Here’s the definition of the velocity of money:

“The velocity of money is the frequency at which one unit of currency is used to purchase domestically produced goods and services within a given time period. In other words, it is the number of times one dollar is spent to buy goods and services per unit of time. If the velocity of money is increasing, then more transactions are occurring between individuals in an economy. A decreasing velocity might indicate fewer consumption transactions are taking place.”

You might have seen one of the illustrative tales circulating around the web about the one $10 bill that ends up paying a half-dozen debts as it circulates through the town: the grocer pays a debt owed the baker who uses the $10 to pay a debt to the florist and so on. This is an example of a high velocity of money: the $10 bill changes hands many times in the space of a few hours, funding transactions that all lead back to the exchange of a good or service.

There’s one part of the definition that is often overlooked: the velocity of money only tracks domestically produced goods and services, so all the transactions that end up in a container of goods from China being unloaded in Long Beach aren’t counted.

This is striking: money stock basically doubled from 2009 (the brief Global Financial Crisis recession) to last February, before the pandemic had any impact on the economy. In other words, setting aside the extraordinary vertical expansion of money stock in the past year, the U.S. economy’s stock of money doubled in a bit over a decade, just to keep GDP (“growth”) at an anemic, barely-above-flatline rate of expansion. 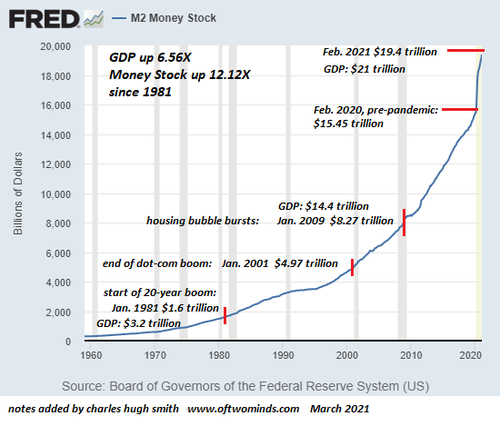 Put another way, there wasn’t much bang for doubling the supply of bucks.

Meanwhile, the velocity of money has absolutely tanked. In the era of widespread prosperity in the 1960s and 1970s, the velocity of money ratio remained in a band between 1.7 and 1.8, moving up toward 2 in the inflationary late 70s as it made sense to trade cash that was losing value for goods and services before it lost even more purchasing power.

Velocity returned to this range in the 1980s boom, and then rocketed to postwar highs at 2.2 in the Internet boom of the 1990s. Since that top in 1997, money velocity has been in a secular decline. As every Fed-inflated financial bubble pops, money velocity takes another leg down. Even before the pandemic, it was in a steady free-fall even as the supply of money steadily rocketed higher. 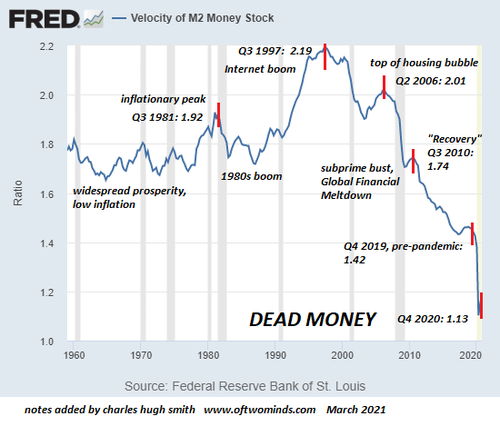 So what do we make of this stunning expansion of money and equally stunning collapse of money velocity? Ours is a Dead Money Economy. New money is created in the trillions of dollars, but it is either shipped overseas to exporters selling goods to Americans or it’s being stashed somewhere rather than being exchanged for domestically produced goods and services.

In other words, our financial system is pushing on a string: it keeps creating trillions in new money which is either stashed away or sent overseas, having been spent on imported goods. This is the acme of a Dead Money Economy.

Lastly, let’s look at the Fed’s broadest measure of money, MZM which is inexplicably being discontinued, just as the measure it replaced, M3, was discontinued. (Do we need to keep moving the goalposts on money stock to mask the abject trajectory of our Dead Money Economy?) 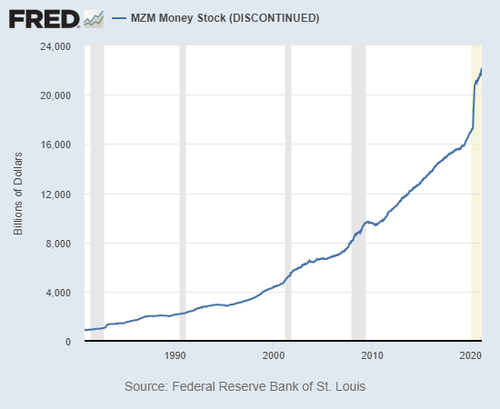 “MZM (money with zero maturity) is the broadest component and consists of the supply of financial assets redeemable at par on demand: notes and coins in circulation, traveler’s checks (non-bank issuers), demand deposits, other checkable deposits, savings deposits, and all money market funds. The velocity of MZM helps determine how often financial assets are switching hands within the economy.”

In other words, if we want a summary of America’s financial system, we look at the velocity of MZM money. MZM money stock has skyrocketed right along with M2 money stock–no surprise there.

The surprise is that the velocity of MZM money topped out in the inflationary peak of 1981 and has been in a free-fall since the start of the financialization-globalization era began. 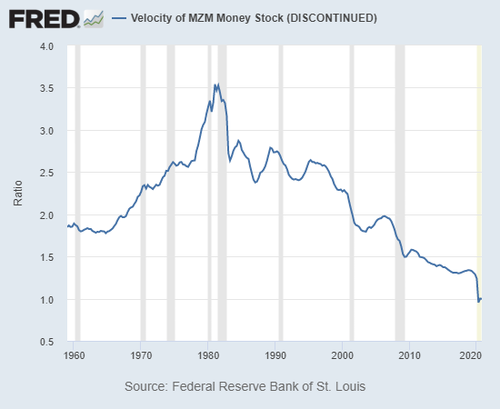 Not to put too fine a point on it, but this aligns with the secular stagnation of earnings/wages which began in earnest at the same time (1981), and the rising dependence on central bank intervention / stimulus which has reached the extreme absurdity where the U.S. stock and bond markets and its entire financial system now teeter on the edge of collapse if there is even a slight hint that 1) the Fed won’t give more free candy to Wall Street or 2) the Fed has lost control of the Dead Money Economy it has created.

If you think a Dead Money Economy is a healthy economy, you might want to cut your intake of Delusionol.