Pakistan’s military said the test “was aimed at re-validating various design and technical parameters of the weapon system including advanced navigation system,” according to the country’s English-language newspaper Dawn. State media subsequently put out official video of the launch…

The Pakistani military’s Inter-Services Public Relations (ISPR) later confirmed the Shaheen-1A missile test had been successfully completed with no incident, performing as intended.

With a range of over 900 kilometers (or more than 550 miles) and described as “engaging targets at land and sea with high precision,” the ballistic missile would likely be the number one weapon of choice deployed should Pakistan ever enter major war with its nuclear-armed neighbor India.

Pakistan conducts a successful test of Shaheen 1A surface-to-surface ballistic missile with a range of 900 kms. Rawalpindi – March 26, 2021 The test flight was aimed at re-validating various design & technical parameters of the weapon system including advanced navigation system pic.twitter.com/hSD8ShHQfz

The historic rivalry and tensions have lately flared up again especially over the contested Kashmir region, after in August of 2019 India’s government voted to revoke the special status that gave Jammu and Kashmir limited autonomy. 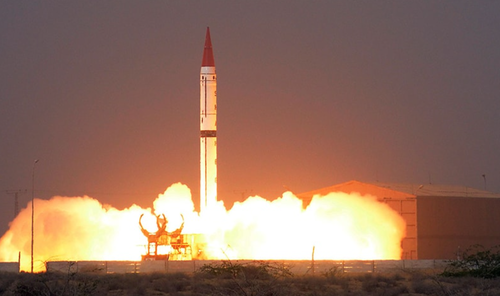 India’s Army then sent tens of thousands of troops into the region, which leaders in Islamabad condemned as tantamount to ethnic cleansing targeting Muslims.