Twitter competitor Parler may be gone for good, after Amazon Web Services (AWS) suddenly dumped the social media platform from its cloud hosting service amid a pro-Trump ‘cancel crusade,’ following last week’s protest at the US Capitol turned deadly after a small group of activists ran amok inside the US Capitol building. 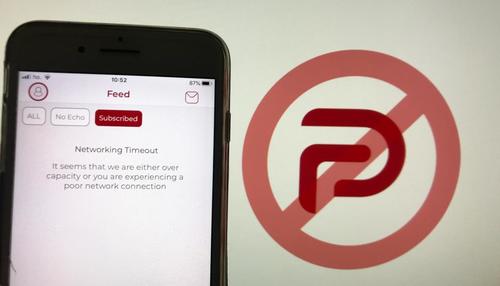 Parler CEO John Matze told Reuters on Wednesday that he does not know if or when the service will return for its 12 million users, adding that the best thing would be if they could return to Amazon.

On Monday, Parler filed a lawsuit against Amazon, which the Seattle-based tech giant says has no merit. According to Matze, they are considering suing other vendors but did not elaborate. The company was also booted from online payment processor Stripe, along with American Express. They also had their Scylla Enterprise database access, along with their ability to send SMS messages to confirm users after Twilio banned them. Lastly, Slack cut ties with the company – preventing them from communicating with their “jury” of paid and volunteer users who make content moderation decisions.

Amazon cut Parler, a platform which styles itself as a “free-speech” space and is favored by supporters of U.S. President Donald Trump, off its servers this weekend for failing to effectively moderate violent content. Apple Inc and Alphabet Inc’s Google also kicked Parler from their app stores.

“It’s hard to keep track of how many people are telling us that we can no longer do business with them,” said Matze.

Amazon on Tuesday filed exhibits that showed it had warned Parler late last year about vile and threatening language on its site before cutting off the platform after the attack on the U.S. Capitol. In a court filing Wednesday, Parler said that Amazon had not provided proof that the platform was used to incite and organize the Jan. 6 events. –Reuters

According to ‘disinformation researchers’ cited by Reuters, Parler was used by far-right groups “maintained a vigorous online presence on alternative platforms including Parler where they spread violent rhetoric ahead of the unrest.”

Amazon claims they warned Parler to institute moderation tools against such rhetoric.

Scylla, the database company, said that it terminated its relationship with Parler because they “cannot and will not allow our technology to be used to incite violence.”

Twilio said Parler had violated its acceptable use policy and that it would suspend it if it did not remove calls for violence from the social platform. The other vendors did not immediately respond to Reuters requests to comment.

Matze said that some Parler employees had requested to take a few weeks off work and also said he and staff had received threats and people showing up at their houses.

He said there had been no changes to investors in Parler, which gets funding from hedge fund investor Robert Mercer and his daughter Rebekah Mercer.

Meanwhile, Antifa has been using Facebook and other platforms to coordinate riots and domestic terrorism for the past four years, while Twitter is chock-full of violent threats, but who are we to tell ‘private platforms’ what they can do? If you don’t like it, just start your own… oh wait.

Silicon Valley defenders: If you don’t like Big Tech’s censorship, just start your own social media platform with rules you want.

Parler: OK, we did. We’re the country’s most popular app!

Amazon/Apple/Google: We’re uniting to take you off the internet with our monopoly power. pic.twitter.com/LCaQIvovF0

BREAKING REPORT: Former FBI Agent on the Ground at US Capitol Says at Least One Bus Load of Antifa Thugs Infiltrated Trump Demonstration