House Speaker Nancy Pelosi has been attacking Republicans members as traitors in a continuation of the reckless rhetoric from the last four years on both sides. Despite a desire for greater unity from voters, Pelosi has sought to capitalize on rather than close those divisions  while other Democrats are calling for blacklists and retaliatory measures. The Speaker has now doubled down on these attacks by claiming that the need to increase security is due in no small degree to the “enemy within” in reference to the Republican ranks.

As with her prior conduct as Speaker, Pelosi continues to refuse to recognize any obligation to the institution in seeking consensus and reconciliation.

Pelosi declared on Thursday that there is an obvious need for a “supplemental [budget] for more security for members when the enemy is within the House of Representatives — a threat that members are concerned about in addition to what is happening outside.” 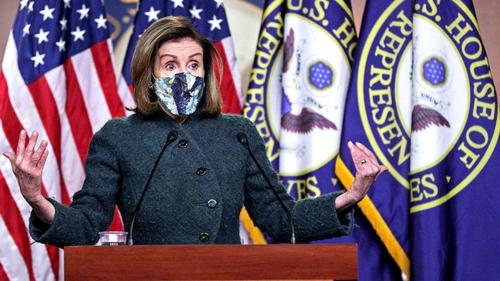 Such language obviously thrills many who want to portray any opposing voices as traitors and seditionists. It has been rhetoric building for years as the more leaders and academics engage in the politics of personal destruction. The idea is to avoid responding to actual positions by labeling the opposition as actual traitors, criminals, and threats. It is the very signature of this age of rage in American politics.

The members are legitimately debating the issue of members carrying permitted weapons in Congress or on the House floor. Pelosi made direct reference to one such member. There has also been criticism of a member for her inflammatory statements on social media. Far enough.  Those issues can be addressed. However, even when confronted by reckless accusations against a member who was reportedly showing her own family around the Congress, Pelosi has doubled down on the rhetoric of treason in reference to Republicans generally. It precisely the type of rhetoric that many of us condemned when used by former President Donald Trump.

I have commended President Biden for his statements about the need to end the language of division and personal recrimination. Recently, he repeated that call and said that politicians need to “eliminate the vitriol” and stop that “the ad hominem attacks on one another.” He objected to people who “make anything that you disagree with about the other person’s personality, or their lack of integrity, or they’re not decent legislators, and the like. So we have to get rid of that.”

I like the demeanor of Biden as president. However, as the President was making those comments, Speaker Pelosi was engaging in the very vitriolic language that he condemned. It will not end unless Biden calls out people in his own party and demands a lowering of such rhetoric. His words continue to be drowned out by the words of his own party’s leadership.

VIDEO: Nashville Mayor Laughs And Smiles While Talking About Explosion