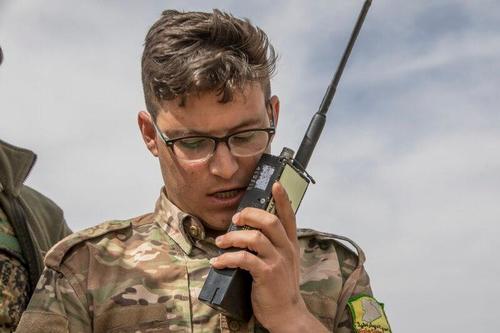 Above: A person wearing an SDF patch speaks into radio during training with JTACs (Sgt. Torrance Saunders/Army).

According to a report from Air Force Times, the pictures might be the first time JTAC training with the SDF is publicized, but the training is nothing new. SDF fighters have had the ability to call in US airstrikes for years now.

The report said the SDF fighters were not trained to be JTACs themselves but relayed coordinates to US JTACs who would then order the airstrikes. During the campaign against ISIS in the Syrian city of Raqqa, which was decimated by US bombs in 2017, some SDF members were given an app for their tablets that they could put GPS coordinates into, which they would share with JTACs through encrypted messaging.

The Biden administration has made it clear it will continue occupying northeast Syria and supporting the SDF. While this support is framed as part of the fight against ISIS, it is more about keeping the oil resources in the region out of the hands of the Syrian government in Damascus.

On top of the occupation of the oil fields, the US maintains crippling economic sanctions on Syria that specifically target reconstruction, preventing Syria from rebuilding after a decade of war.

The sanctions have had a devastating impact on the civilian population. According to the UN, 12.4 million Syrians are facing starvation.